Why I Have Fenced my Collaborative Robot

Collaborative robots are not safe to use along workers! It sounds odd but we cannot assume that using a collaborative robot alongside workers is entirely safe. There are a lot of things to take in consideration before claiming such things. We recently installed a collaborative robot on our shop floor and we needed to fence it. Read more on our process to implement a safe working environment. 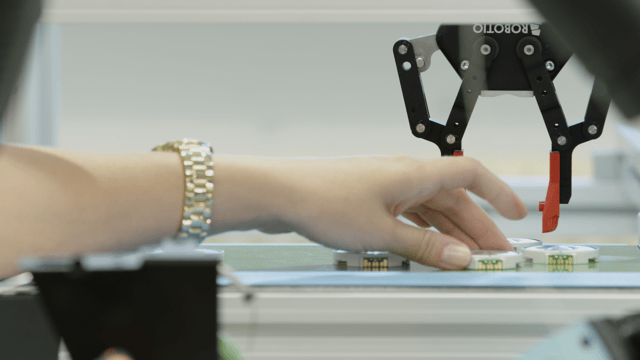 The popular way of thinking is to assume that collaborative robots are safe, which is totally wrong. I’ll give you an example:  make your collaborative robot swing a knife close to workers. Is your robot still safe? No, it isn’t. On the same note, if you use a large industrial robot to carry a car but the robot monitors your position and stops when you enter its working radius, you are in presence of a safe collaborative robot. Confused yet?

Note that Power and Force Limiting is the collaboration mode that most people recall as being ‘’collaborative’’. With that being said, this safety standard mentions the obligation of doing a risk assessment during your robotic implementation. And this is where it all changed for our particular cell. 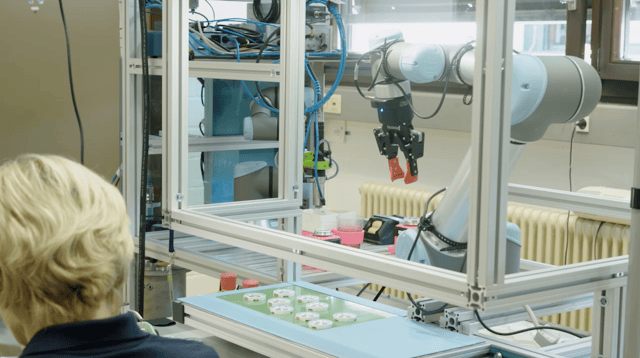 As we were designing our robotic cell, we came across the idea of using a UR10 from Universal Robots. I had worked with a UR previously, so this time would be easy for me. The speed and payload specs were fine for my application, the price was OK and I was able to fit Robotiq products easily on it. It was a no brainer. As I went further into the design phase of our product testing cell, I realized I needed to have extrusions of different lengths to test my product. I needed to lift weights by the tip of these extrusions. At some point I took a step back, looked at the parts that the robot would carry and the speed at which it would operate, and I thought to myself:  this is quite dangerous.

How to Perform a Risk Assessment for Collaborative Robots eBook

At that moment, I went back and re-read the entire ISO/TS 15066 eBook, which treats of collaborative robot safety. I went through all the different force, pressure and energy limitations and realized I needed to 1) do a risk assessment; 2) assist in making the cell safer for the workers. So I analyzed all the potential risks and reduced the ones that seemed most dangerous to me. I went and removed some sharp edges that were unnecessary, tried to see if I could reduce the speed of the robot and went through all the different hypotheses to make my robot as collaborative as possible. It turned out that, by design, my application was not collaborative. The robot was carrying weights and sharp parts rapidly, and I was overshooting the safety recommendations of the ISO standard. It all came down to the conclusion that I needed to fence my robot for the following reasons:

And  this is where the hardcore safety geeks would jump in and say: ‘’You could have used a different type of safety sensors and not use fencing to make your robot safer.’’ In fact, I could have designed my cell to make it compliant to Safety Monitoring Stop or Speed and Separation Monitoring, but the fact is that my robotic cell by design needed to be put inside a very limited workspace and that the robot motion would always be stopped and slowed down because of the proximity of the users. Thus, the best way to make my application fast and reliable was to put a physical separation between the worker and the robot. Personally I have used some extrusions and plexiglass to separate the robot from the external world. It was fairly easy to do and can eventually be dismounted and used for further applications.

Safety should be your main concern when designing a robotic cell


How to estimate a risk?

If you are still wondering how I ranked the different risks and how I learned the different potential risks of a robotic cell,  you should know that we have built a resource to clarify these notions. First, we have the ISO/TS 15066 Explained eBook that will help you understand what the ISO standard is and what is its aim. We also have a risk assessment template that will help you perform your robot cell risk assessment. and most importantly help you rank the different risks of your robotic cell, and reduce them.