What are Accuracy and Repeatability in Industrial Robots?

An industrial robot has many metrology or measurable characteristics, which will have a direct impact on the effectiveness of the robot during the execution of its tasks. The main measurable characteristics are repeatability and accuracy. Roughly speaking, the repeatability of a robot might be defined as its ability to achieve repetition of the same task. On the other hand, accuracy is the difference (i.e. the error) between the requested task and the obtained task (i.e. the task actually achieved by the robot). In robotics, when talking about repeatability and accuracy, their meanings are often confused. So, repeatability is doing the same task over and over again, while accuracy is hitting your target each time. 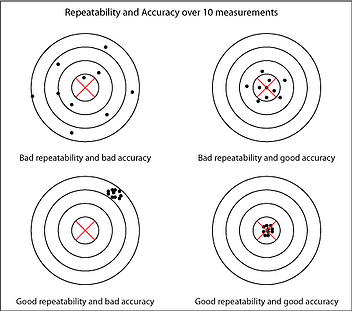 First, let’s introduce the main characteristics of a robot whose repeatability and accuracy are likely to be important to evaluate: path, position and orientation. These are the factors that you want to assure you are achieving each and every time you set your robot and end-effector in motion. The combination of position and orientation with the robot’s end-effector is called a pose. Furthermore, the pose accuracy generally will have some effect on the path accuracy, which because of its inherent movement is a dynamic characteristic. However, in order to avoid confusion in this short paper, we will focus on static characteristics without considering motion effects. Therefore, only the pose accuracy and repeatability will be discussed. The pose accuracy and repeatability of the robot are divided into the two previously mentioned components: position and orientation. To simplify even further, the following explanations are set forth describing  position only, though they can be extended to orientation as well.

A great example of Universal Robot repeatability on a given pose.

Geometrically, the position accuracy of the robot for a given position can be defined as being the distance between the desired position and the centroid position (centroid is the mean position of all the points in all of the coordinate directions) which is actually achieved after repetitive movements of the end-effector toward the original desired position (see the Figure below). Mathematically, absolute accuracy is the compilation of the composed errors for each of the x, y, z cartesian positional errors. Finally, the robot position accuracy for a specific workspace can be described as the maximum composed error available for several positions uniformly distributed inside the predetermined workspace or reference frame. 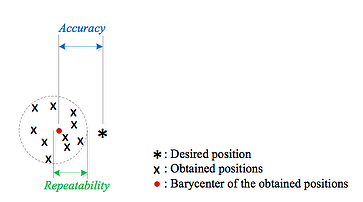 Figure 1. 2D Illustration of the Geometric Meaning of Accuracy and Repeatability

Repeatability can be defined as the closeness of agreement between several positions reached by the robot’s end-effector for the same controlled position, repeated several times under the same conditions. Geometrically, the position repeatability can be defined as the radius of the smallest sphere that encompasses all the positions reached for the same requested position. For more details about the calculation of accuracy and repeatability, interested readers are referred to the ISO: International Organization for Standardization. 1998. Manipulating industrial robots – Performance criteria and related test methods, NF EN ISO9283.

All in all it is important not to confuse accuracy with repeatability and vise versa. Though the ultimate objective is to have both; a robot that can repeat its actions while hitting the target every time. The description of this 2016 release from Que publishing promises “a unique introduction to programming robots to execute tasks...