Test Your Robot Palletizing Against a Human… No Contest!

Which would win in a palletizing race? A human or a robot? The winner of this robot-human test is not as clear as you might think…

So you create an experiment… The robot and the human are going to have a race!

The challenge: To see who can do their palletizing task the fastest and the best.

It's a fair fight. You give both human and robot an identical palletizing cell. Each cell has a conveyor, which feeds it with a consistent stream of products to be palletized.

By the end of the working day, which cell will have palletized the most boxes? The human worker or the collaborative robot?

It's all to play for…

Are humans better than robots? Well, yes… but…

Workers are sometimes concerned that robots will take over their job. They worry the robot will perform the job better than them. They fear their job will become obsolete.

Are robots really better than human workers? The short answer is no. Humans are infinitely more flexible and capable than robots.

Humans and robots each excel at different types of tasks. Humans are great at highly varied tasks that involve decision-making and intelligence. Robots are best for highly repetitive tasks that require little to no decision-making.

But what about our race? Which contestant will succeed at the highly repetitive task of palletizing?

A confounding factor will affect our robot contestant's chances in the race — collaborative robots move slowly compared to some other robots. For a task like palletizing, they often move more slowly than a human performing the same task.

Although the robot is better suited to repetitive tasks, its slower speed could give the human competitor an advantage.

The robot-human test is not fair competition

The race between robot and human begins. And the human is immediately out in front. They can move much faster than the robot and their natural agility means they are packing boxes onto the pallet very quickly.

In fact, the conveyor isn't moving fast enough for the human. They have to wait between boxes. When a box approaches, they quickly grab it and put it on the waiting pallet. They are exhibiting the sort of enthusiasm and productivity that you might see at the start of a work shift. They are well-rested and keen to get the job done.

In the first 20-30 minutes, the human competitor gets far ahead of the robot. They easily fill a few pallets with boxes and they are feeling good about themselves.

But, our human worker is also showing some early signs of fatigue. Sweat runs down their forehead and they are slowing down.

The robot plods on, consistently palletizing boxes at a slow but steady rate.

Robot vs human: Why humans dislike a competent robot

Our human competitor is doing well at the physical side of the palletizing race. But something else is happening to them. Something that you can't see…

Our worker is becoming demotivated.

The aim of the study was to investigate how a human's perceptions of their own abilities change when they compete side-by-side with a robot on a physical task.

One finding of the research was that people view the robot more favorably when it is less competent at the task than they are. Perhaps our human worker felt good about the robot at the start of the palletizing race, when it was clearly moving slower than them. But the tables turned when the robot become more capable than the human at the task. The people in the study resented the robot's higher task performance.

Did this resentment cause them to work harder to keep up with the robot? No. Exactly the opposite happened! They lost confidence in their own abilities. They thought of themselves as less competent at the task and stopped trying to win.

Our human competitor is now 1.5 hours into our palletizing race…

They are struggling. There is a constant stream of boxes coming from the conveyor. And they can't keep up. They are tired, bored, and demotivated. The quality of their palletizing is also suffering — boxes are squint on the pallet. A few boxes have already fallen off.

The robot continues to palletize at a steady, consistent pace. There are still 6.5 hours in today's work shift. Now, the robot is looking like it will be the clear winner of the race.

How to make the most of robot palletizing superiority

People sometimes assume the advantage of a robot is that it will operate quicker than a human worker. This is often not the case.

As we can see with our palletizing race, the major strength of a robot isn't speed. Regarding speed, the human wins. Instead, the benefit of a robot palletizer is consistency.

As our palletizing race continues, the human would become more and more worn-out by the task. They would resent the robot and their job… and their palletizing quality would suffer even further.

When humans feel they compete with robots, their performance can suffer. As research has shown regarding human-human job competition "Some competitions elicit fear and anxiety because they focus employees on the threat of being laid off, losing income, or being publicly humiliated."

How can we use this learning to improve our robotic automation?

Instead, make the robot a part of the team. 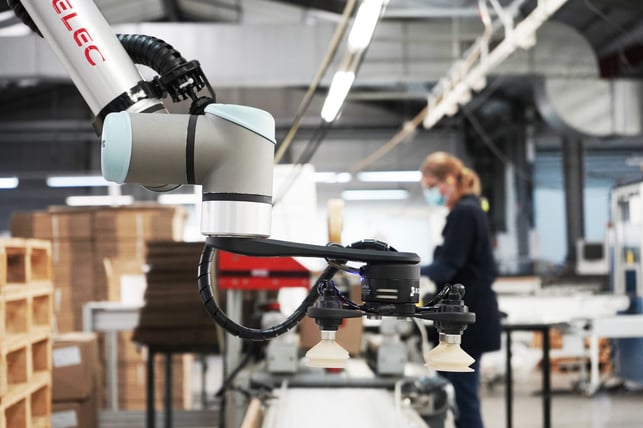 Your first step: Make the robot part of your team

The most successful robotic deployments involve the team.

Your human workers have likely been doing the manual palletizing task for a long time. Instead of proposing a robot as a replacement for them, introduce it as a tool for their palletizing task. Put those workers in charge of using that tool.

When you involve your team in your palletizing robot deployment, it stops feeling like a competition. Instead, the robot feels like a valuable member of the team.

To see how companies like yours have successfully deployed palletizing robots to their processes, check out our palletizing page.

How do you think you would do in a race with a robot doing your job? Tell us in the comments below or join the discussion on LinkedIn, Twitter, Facebook, or the DoF professional robotics community. 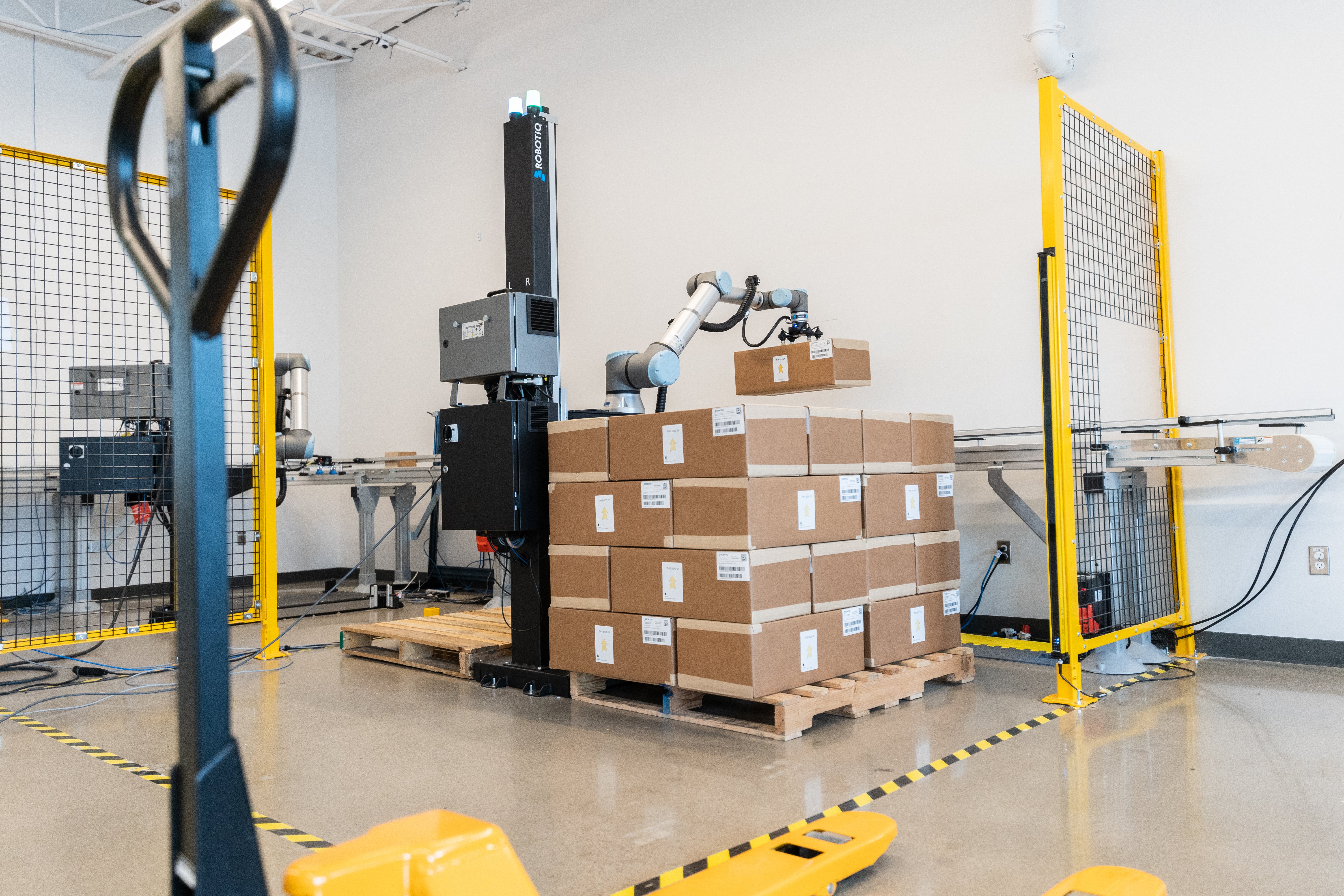 7 Palletizing Patterns for Your Cobot to Reduce Product Damage

If you're using a cobot to palletize products, you'll want to ensure you're using the right palletizing pattern! 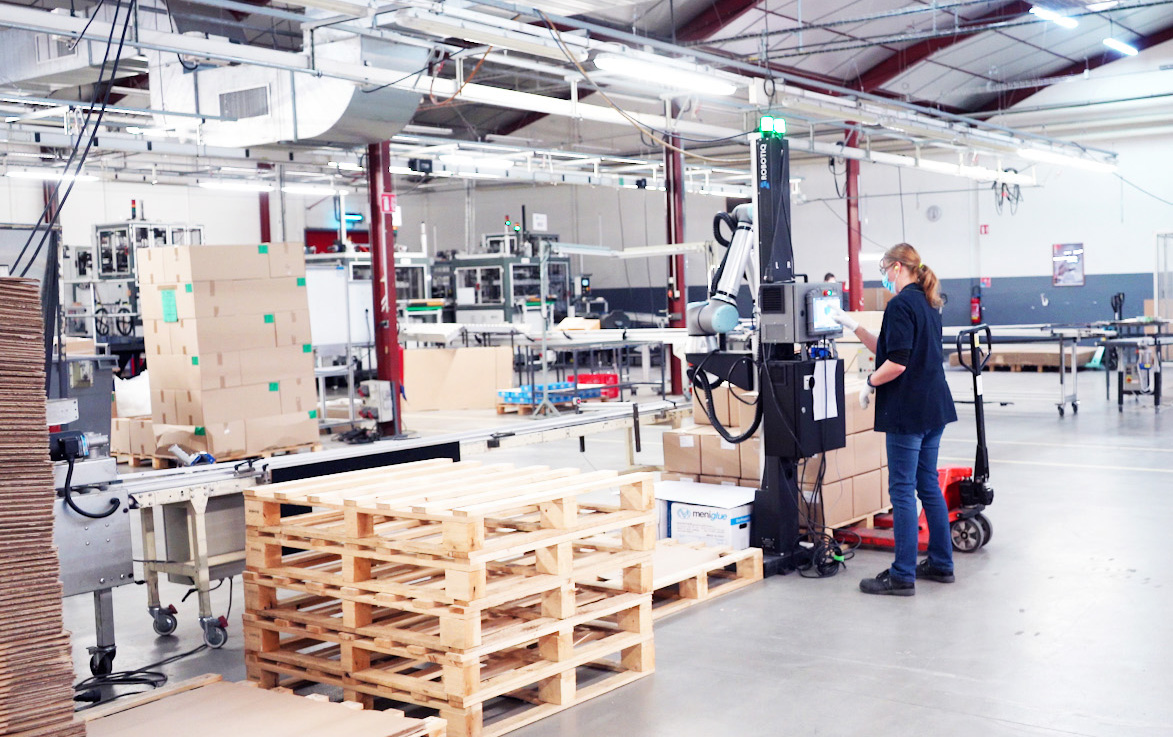