In the latest blog posts, we have been talking about the different machine tending applications that can be done with a robot. From small to big robots, the advantage is to liberate the operator from redundant tasks and give him more pertinent responsibilities. Since machine tending is not specific to CNC machines, we thought it would be great idea to look at some other manufacturing tasks that can be done using machine tending, like, injection molding.

The principle is exactly the same as with CNC machines. In fact since the injection process takes a couple of minutes, the human worker will use this time to do something else. As the two different tasks of the worker are generally not synchronized, either the machine will remain unused for a period of time or the worker will be waiting for the machine.

To avoid this situation, robots are placed beside the machines they will be tending. This allows the production to be virtually non-stop. As soon as the machine stops, the robot can take the finished part, removed it from the machine and the production goes on. Before the introduction of the Universal Robots arm, the machine would likely wait for the operator. Now, it is a question of seconds before the machine gets back into production. Take a look at the following video to have a better idea of the process.

Here the robotic cell is a simple Universal Robots 6-axis collaborative robots paired with a custom robot gripper. The main advantage of using this type of robot is its ease of use. In fact, fast and easy integration are an addition to the easy-to-program robot interface. The use and programming of the robot can be done with a little simple training. Another cool thing is that the robot does not require any fencing. This allows it to have a small robotic cell footprint. By having a small cell footprint, it allows the worker to be in close proximity to the robot without being scared of being harmed by the robotic arm. The robot is also relatively cheap and has a fast ROI. In this case, the return on investment was as short as 6 months. With such a fast return on investment for the project, it really is easy to justify the acquisition of these machine tending robots.

In this particular case, the gripper used for the unloading of the part is a custom robot gripper specific to this type of part. For most machine tending applications you may want to use a gripper than can adapt to different part dimensions, grippers such as the 2-Finger 85 Adaptive Gripper are often a good solution for machine tending with a Universal Robots arm.

“With the Universal-robot our injection moulding machine is now capable of working at full capacity - and that's over a very long time and we can utilize resources for other tasks !” - Production Manager - Injection Moulding Facility - Gold Coast - Brisbane Australia 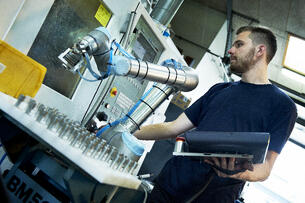 Some applications require the same type of industrial robot to execute other types of machine tending operations. It can be useful for a company to introduce this type of robot for a certain application and then to be able to do the exact same integration in another section of the plant or on another machine on the work floor. Take a look at what Inertia Switch has done to automate their machine tending operation.