How Hoch Oblaten Tackled the Skills Gap with Robot Palletizing

Skills gaps are common in manufacturing right now. According to some reports, manufacturers are facing the largest shortage of workers since the 1980s, with many listing it as their top challenge.

How can you overcome skills gaps in your business?

For German baked goods manufacturer Hoch Oblaten, the solution came with robotic palletizing, along with a surprising extra benefit…

Hoch Oblaten is a manufacturer of baked goods based in Bürgstadt, Germany. They specialize in producing wafer-based baked products for a range of uses, including communion wafers and home baking.

The company has about 70 people and serves various international markets, including the USA.

"We have one particular product, mostly for the US market, that has been growing in demand. This was the reason we bought this robotic solution. It's called "Ostergras" and it's edible grass. We pack it and ship it to the US market.

"The German market is also growing because of coronavirus. People are staying at home, they are cooking more and baking more."

Ostergras (which literally translates as "Easter grass") is made from curled, shredded wafer that is colored green. It is used in home baking to create a decorative backdrop for other edible goods, such as a nest for chocolate eggs at Easter.

The surge in demand for Hoch Oblaten's products was obviously positive. But, it brought challenges.

Manfred explains that Ostergras, for example, is not easy to package:

"The shape of the product doesn't allow it to be machine packed, so it has to be done by hand. It is delicate and the shape makes it impossible to process it automatically. We tried, but the result didn't look good, so no one was buying it."

How could Hoch Oblaten keep up with the rising orders for such a delicate product?

The difficulty of finding workers in baking manufacturing

To make the situation even more difficult, the company was struggling to find workers. Like many manufacturers, there were just not enough people in the jobs market for the work they needed to do.

"Finding workers is our biggest challenge. Nobody wants to work with their hands. The people who are coming out of school want to work with computers or be digital nomads. It's difficult to find workers for manufacturing."

This skills shortage meant that it wasn't possible to hire new people to keep up with the rising demand.

They needed to find another solution…

Could automated palletizing be the answer?

One day in late 2021, one of Hoch Oblaten's suppliers came to Manfred with a suggestion.

"The supplier had a robotic palletizing solution and he thought it would be interesting for us. We said "okay" and he told us to come to their workshop to look at it.

"When we were there, we saw the robot working. We liked the idea of palletizing with a robot… but, I didn't like the solution they were using."

Palletizing was a task that could be automated in Hoch Oblaten. Although the primary packaging steps needed to be performed manually, palletizing was a non-value-added task.

The workers also didn't like doing the palletizing task. The pallets were often stacked very high and they had to use a ladder to place the top layers of boxes. This took a lot of time.

"Their solution was only 1.8 m high. Our task needs 2.2-2.3 m. But, the biggest problem was the programming logic.

"The robot arm didn't even know where it was within its workspace. So it could happen that the arm would move over the completed pallet and it could smash the boxes around. That was the impression I got of it."

He needed to find a better robotic palletizing solution…

Manfred began his search for a solution by mapping out his requirements and drawing some sketches of how the robot cell could look.

The task requirements were:

As is often the case with small companies, Manfred had to research the solution himself. He began by searching online…

After some searching, a promising-looking solution came along.

On the website of a local distributor, Jugard+künstner, Manfred first saw the Robotiq Palletizing Solution. 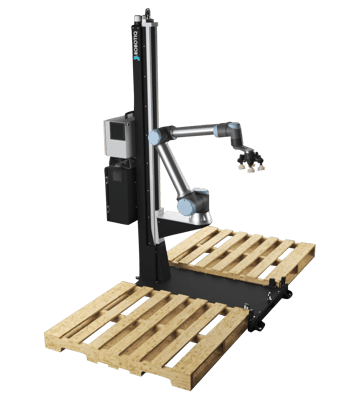 The Robotiq solution met all of his requirements. It also allowed the robot to load the first pallet while waiting for intermediate layers on the second pallet, which most other solutions didn't support.

The quick delivery time was a key factor in his buying decision. He ordered the Robotiq solution and it arrived in around only 2 to 3 weeks.

A common roadblock that happens in a DIY robot deployment

The deployment of the robot was very simple.

"To deploy the robot and the palletizing solution, I think I needed 1.5 days. But, I was alone so this was no problem. The real work was in integrating the conveyor." 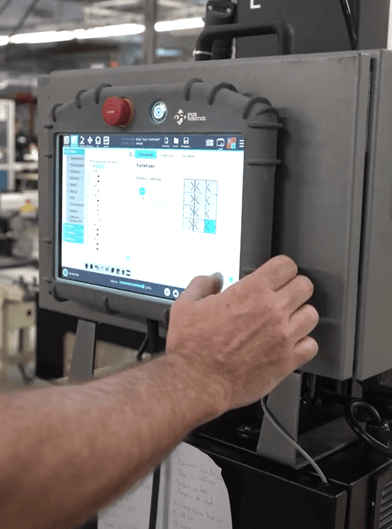 As is often the case with out-of-the-box robotic applications, the roadblocks during deployment rarely come from the solution itself. In this case, the second-hand conveyor that Manfred had bought caused the most challenges.

"The conveyor was a bit broken and I had to fix it. This took maybe 1 week. I also thought that I needed a new PLC to control the conveyor and the sensors."

How can you get help when you are deploying your robot alone?

Like many new customers, Manfred made use of Robotiq's support line.

"After a phone call with Robotiq support, I saw that I didn't need an external PLC because the robot can control the conveyor and sensors.

"In 1.5 weeks the solution was fully working for the first time. Then Robotiq helped me to solve some minor problems with the collision model. But, this was fixed very fast."

A surprising result that has improved productivity even further

What has been the impact of the palletizing robot on the production at Hoch Oblaten?

"Since October, it's been working 8-16 hours a day. Thanks to the robot, we now have one worker more who would have done the palletizing before. They can do some work that earns money, such as packaging the Ostergras.

"I think the workers are very happy because they don't have to lift the boxes to the high height onto the pallet. It's much easier for them to let the machine do this."

Hoch Oblaten has also seen an unexpected benefit caused by adding the robot to the line.

"Sometimes the workers want to beat the robot, so they are now working faster. The bottleneck is now the workers!"

What's next for robotics at Hoch Oblaten?

Having seen the great possibilities of robotics, Manfred is now looking to the future.

"This was the first robot we have in our factory. Now that I've seen how easy it was to deploy it, I'm seeing robots in my mind everywhere in the workshop.

"I'm thinking of material picking and pick and place — both for moving the wafers in their packaged and the unpackaged form.

What advice would you give to anyone starting with robotic palletizing?

Manfred has advice for anyone who is thinking about starting with robotic palletizing.

"Just do it. Don't wait. Because the time you're taking to think about whether or not you can do it is lost time. As soon as you do it the robot earns money.

You can learn more about the Robotiq Palletizing Solution on our solutions page.

What questions do you have about robotic palletizing? Tell us in the comments below or join the discussion on LinkedIn, Twitter, Facebook, or the DoF professional robotics community. 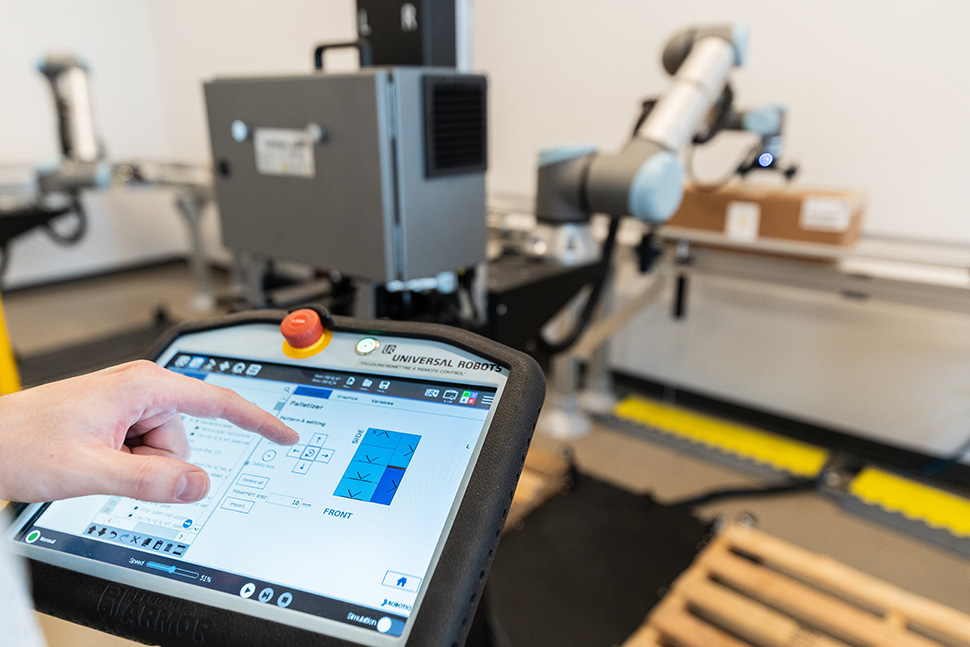 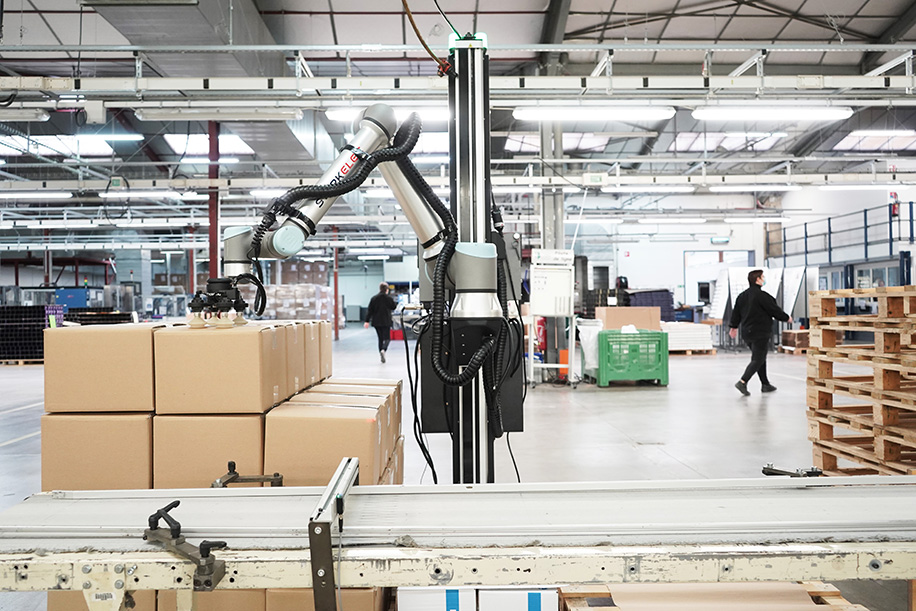 How do you elegantly scale production when your processes rely on manual steps?