Tactile sensors are becoming more and more popular in robotic research for improving the precision and contact with the robot’s environments. However, these sensors are expensive and still not adapted to real world applications. Taking advantage of this fact, TakkTile, founded by researchers from the Biorobotics Laboratory at Harvard University, decided to offer low-cost robust tactile sensors.

These sensors are made of MEMS barometers currently used in such devices as GPS locators. The barometer delivers 1-gram of sensitivity. To make them more resistant, they are filled with rubber. The sensitivity is also improved by the rubber contact with the diaphragm of the sensor. TakkTile sensors can even resist a baseball bat hit. Moreover, they cost a fraction of the price of the actual systems. 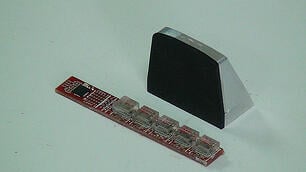 To show how their technology could be adapted to real industrial applications, TakkTile decided to add their sensors to the 3-finger Adaptive Gripper from Robotiq. They succeed in giving the Robot Gripper a real-time force measurement even for very light pressure.


TakkTile can see a lot of applications for this new integration, for example, they mentioned haptic teleoperation and autonomous grasping.

Whether because the environment is hostile or because high precision is required, some tasks presently require remote robotic assistance. This is called teleoperation. Being able to replace a human by a robot, however, brings a lot of challenges. To improve teleoperation performances, force feedback devices have been used and do give good results.

On the other side, neurophysiological and psychological studies have demonstrated that the human sense of touch includes tactile sensations. A lot of different nerves are located in the hand and, according to studies, both force and tactile senses are needed to make up human dexterity. So, haptic sense, which includes force and tactile feelings, can improve the teleoperation experience a lot. The operator can perceive, through the master device, the forces resulting from the manipulation occurring at the distant site. Using TakkTile technology to get precise information from the distant robotic device can greatly improve the haptic response system since it is very sensitive.

Another challenge in the robotic gripper market is to grab deforming objects. Robotiq’s End effectors can easily adapt to any size object, but the grip force is usually programmed.

The information provided by TakkTile’s sensors could be used to allow real-time adjustment of the robotic gripper force giving the device a real sense of touch. An application like this will be very profitable to the industrial world where fragile parts have to be handled.

For more information on the integration project see: TakkTile for Robotiq Gripper