For high-mix robotic applications, having a single gripper which is able to adapt to different shapes and volumes can be very useful to reduce the cycle time and overall cost of a robot cell. In some applications like assembly, it may also be required to control the grasping force to make sure that fragile objects are not crushed by the gripper. For this reason, we have implemented on our Adaptive Gripper a force parameter which can be adjusted to accomodate the softness or fragility of the gripped object. In this article, I will explain how it works in a nutshell. 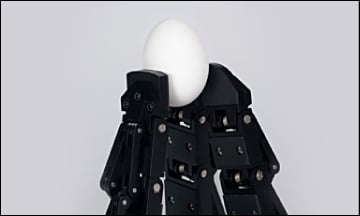 First, I need to say that it is a lot easier to control the grasping force for a servo-electric gripper. Indeed, pneumatic grippers can only adjust the grasping force by varying the pressure of the air system. Among the problems associated with pneumatics, let's just mention stiction that can result from a low pressure and that force and speed cannot be controlled independantly. It is either fast and strong or slow and gentle.

In the case of a servo-electric grippers, a way of measuring the applied force is required. The first way that comes to mind is to use tactile sensors placed on each of the finger's phalanxes. Although this approach can produce very interesting results, it would be unacceptable to rely on external and fragile sensors in an industrial environment.

Another approach would be to carefully monitor and control the current which passes through the motors which drive the fingers. Indeed, the motor torque is directly related to the current flowing in its coils. This approach is ideal for industrial applications because it is very simple (which is often synonymous with reliable).

How to Achieve Gripper Speed and Force Control Simultaneously

So, basically, if we know the current that goes through the motor, we know the force which is applied by the gripper. However, it is also important to control the speed of the fingers, either to synchronize them or to achieves grasps which are as repeatable as possible. So, how can we combine force and speed control?

The way we do it is by controling the speed as a first objective. This means that we measure the closing speed of each finger (by reading its motor encoder) and we adjust the output of the drive to track a target velocity. The second objective is to avoid applying too much force as we track the target speed. This means that the output of the drive is limited to avoid excessive current (and force). To be more precise, an analog measure of the current is performed and compared to the target maximum current. If the target is exceeded, it is considered that an object is in the way of the finger and the motion is stopped (a signal is sent to the robot to say that the grip is completed when all fingers are stopped). By changing the maximum current target, the grip force is directly controlled.

This method is precise when the speed is slow. At high speed, the inertia of the mechanism pushes on the object when the contact occurs and therefore it is often too late to stop the motion. As a result, it is better to use a small/slow speed setting when precision or little force is required. On the opposite side, high speed and high force settings are better when the grasping force needs to be maximized. The good thing is that because this is all programmable, the same robot can pick both fragile and heavy objects using the same gripper. If the shape of a fragile object is known, a partial close of the gripper can be achieved at high speed, followed by a force-controlled slow grasp. This is all possible due to the flexibility of servo-electric grippers!