What Are The Differences Between Ethernet and Ethernet/IP ?

The following article is written to clarify the confusion between Ethernet and Ethernet/IP. First, if you do not know what the link, network and application layers of the OSI model are, I suggest you read our earlier blogposts on communication protocol structure and on industrial protocols used in robotics. 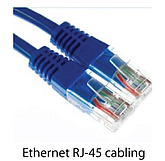 Largely known for it's use in various LAN networking and its use for Internet applications, Ethernet is the link layer standardized by the 802.3 IEEE standard and used with many protocols. It includes a common physical interface composed of hubs, switches, routers, Ethernet cables (RJ-45) and Ethernet network cards (PCI). Standard Ethernet communications have a speed of 10, 100 or 1000 Mbit/s. Ethernet on optic fiber cabling is also available and offers greater speed & distance.

Ethernet/IP stands for Ethernet Industrial Protocol and is an application layer protocol. This communication protocol is designed for use in industrial environments for automation and process control. It is one of the existing Industrial Ethernet (IE) protocols. These protocols use the standard Ethernet link layer (i.e. cabling) and Internet Protocol (networking layer) coupled with a proprietary application layer protocol.