The University of Michigan's Lionel P Robert Jr. talks human-robot interaction, anthropomorphism, the importance of education and the potential for cobot designs to reduce anxiety about widespread automation. 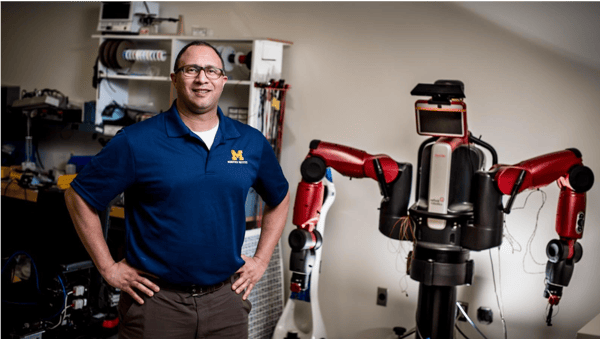 Lionel P. Robert Jr. is an expert in human-robot interaction (HRI) with a focus on manufacturing environments, robots as coworkers and autonomous vehicles.

Roberts Jr. kindly agreed to be interviewed about his work and the unique role cobots play in today's manufacturing.

EC: From the perspective of human-robot interaction, what makes cobots different from traditional industrial robots?

LR: Robots are going to replace a lot of human labor.  But humans are very flexible.  So ultimately, the best package is to have a human and a robot working side by side.  This is what makes cobots particularly fruitful.  But it's just part of the picture.

In the past, we had to separate robots from people using cages because of safety issues.  That limited what humans and robots could do working together as a team.

With the introduction of cobots we're able to remove those barriers and really leverage this human-robot capability in new ways; ways we always knew were possible, but didn't think were technically feasible.

EC:  Removing safety cages and barriers opens up a new set of psychological scenarios for end-users.  Are there special psychological factors at play when humans interact with cobots?

LR:  'Perceived safety' is a top priority for humans.  Humans need to feel safe when they are working around a robot.  After that, the relationship develops so that the human sees the robot as a collaborator, as something that can be trusted and engaged with unguarded.

Ease of use is also important.  If people experience additional mental workload in the day-to-day running of the robot, that means more stress, which is not a good thing in the long run.

It's also important that humans know that they are not going to lose their job if everything goes well between them and the robot.

EC:  Every end-user has a unique relationship with their cobot.  In your view, are end-users generally best served by viewing their cobot as a colleague, a tool, a type of remote prosthesis, or some other category, and why?

LR:  That's a good question.  At the moment the research seems headed towards thinking of robots as a colleague.  That's what we're all trying to do.

But it's not clear to me that seeing cobots as colleague is always a good thing.  Humanizing robots can lead to a lot of unexpected problems.  For example, it can lead to raised and unrealistic expectations, possibly followed by the idea of being let down and disappointed.

EC:  We humans certainly appear to have a deeply-ingrained tendency to anthropomorphism, which can lead us to treat robots as other 'persons,' perhaps even with their own personalities.  This seems to apply in particular to humanoid robots.  Does your research confirm this tendency, especially in relation to cobots?

To encourage successful human-robot collaboration, I think designers should go ahead and leverage this trait when designing robot personalities.

EC:  Now I'm wondering whether anthropomorphism is a feature or a design flaw...

LR:  Anthropomorphism is both a feature and a design flaw under the right circumstance.

What is human-robot interaction and why does anthropomorphism matter?  HRI expert Christoph Bartneck explores...

EC:  We humans are also known for making certain types of judgments about other people within seconds of meeting them for the first time.  Does this tendency transfer to the robot and cobot realm too?

LR:  Yes, it does.  In a previous study, one of the ways that we determined robot gender was simply by changing the robot's name and voice.  We found that as soon as we gave the robot a female name and voice, people immediately made a whole host of judgments about the robot being a female.

This can be good and bad.  It's not always good because people can have preconceived notions about gender and those notions are quickly imported as soon as the robot displays a certain personality or gender profile.

EC:  So, first impressions are important, but the real benefits of a successful cobot implementation to workers are shown over time –e.g. reduced workload, extra time to work on more interesting tasks, reduced repetitive strain injuries, and so on.  In your research have you looked at manufacturing end-users attitudes towards their cobots over time?

LR:  Nope.  But, understanding the impact of time may be a bit problematic due to survival bias.  In other words, employees who are still working collaboratively with robots may be atypical when compared with employees who might have left the company or changed their position because they did not want to continue to work with the robot.  Therefore, we need to be careful when attempting to generalize from such studies with regards to the broader population.

EC:  So, what advice do you have for end-users, especially those that may not have worked with a cobot before?

LR:  I think they should educate themselves.  People should also get an opportunity to take a look at the robot before it is installed.  After that, a lot of the relationship will depend on how well the robot has been designed to induce a sense of safety.

Removing the air of mystery is important from the management perspective too.  A lack of information will lead people to come up with their own theories, they read rumors and myths and start wondering what's going on with the robot.  All that can lead to a lot of trouble.

Educating end-users about the pros and cons, as you would do with any other kind of technology, is important.  End-users need to be open to that too.  Your best chance as a human --in terms of keeping a job and being productive within the manufacturing workforce-- could be your ability to work with a robot.

One of the things that we really need to think about as a society is how to train people on robots.  That skill is going to become very valuable going forward.

EC:  What are your views on human labor displacement through automation?

If we rely on the idea of the free market and pretend it will take care of itself, we will have a lot of people falling by the wayside.  When people fall by the wayside, they vote for people who make promises of change.  This is already happening in America and Western Europe.

If we don't make a conscious effort to be aware of these problems and make sure that automation is a benefit for society as a whole and if we tell ourselves that that everything will be fine, guided by the 'invisible hand' of capitalism, I'm afraid that we're going to be in trouble.

EC:  So what can be done and do cobots have a role?

LR:  For the most part, we design technology to replace humans.  Maybe a better way to approach things is to design robots that enable people instead of replacing them.

EC:  That's one of the great things about cobots, isn't it?

LR:  Yes.  Exactly.  The benefit of cobots is that you have that potential.  You have a design intended to include humans.  That's what makes cobots so unique.

(Note: The interview was edited for length and clarity. It was conducted for educational purposes and the views expressed therein are those of the expert and do not necessarily reflect those of Robotiq. )