Collaborative robots, or "cobots," are relatively new additions to the robotics industry. They work alongside humans, making repetitive or inefficient tasks easier to manage.

Portable cobots are even more recent advancements. What can people look forward to when these innovations become mainstream?

Robotic arms help humans complete tasks that require tremendous precision, such as assembling tiny parts. However, many cobots with precision attachments are dedicated to specific parts of a factory and are difficult to move elsewhere.

This all changes with the launch of the UR3 cobot, Universal Robots' tabletop model. Weighing less than 25 lbs (<12 kg), it transports easily. Workers need only to take it out of the box, mount it on a hard surface, and program the first task—typically less than an hour's work.

Learn more about how the UR3 is already increasing workers' efficiency at companies like Newcomb Spring Corp., which used the cobot for parts handling.

The UR3 is now even easier to move with the ER5 Mobile Robotics Platform, a wheeled base from EasyRobotics. With integrated handholds to push it from one place to another, it allows companies to keep the cobot mobile instead of attaching the UR3 arm to a table. Simple to store in a company truck and handle with one person, the platform is perfect for product demonstrations or sales pitches for companies considering cobots.

Most cobots stay relatively close to the humans they assist, though built-in technology assures that when they do move, they aren’t dangerous to people. Before long, people may see cobots picking up and transporting materials across factory floors while human employees work alongside them.

A company called Otto Motors is working on two cobots—the Otto 100 and Otto 1500—capable of doing just that. The latter parts of their names represent the number of kilograms each can carry. The cobots are self-powered and use on-board lasers to create initial reference maps. 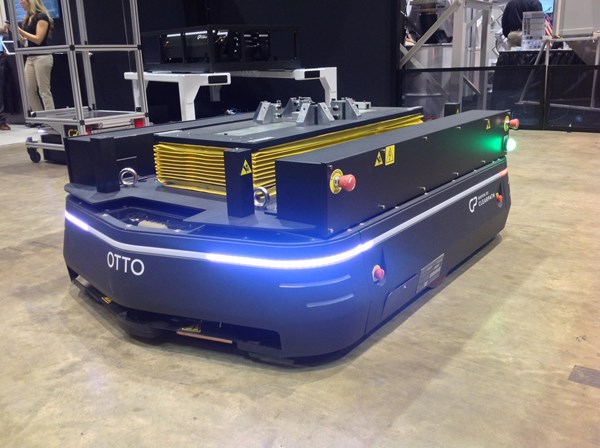 This Otto 1500 has a payload of 1,500 kg, and has been programmed to pick up and drop off a rack of parts. If you step in front of the robot, it stops and finds a way around.

Those maps get transferred to apps, allowing users to update or edit them. Moreover, if a company chooses to buy more than one of these cobots, the newer ones save time by using the same map.

Since it's possible to update the route the cobots take with the app, companies might transport them to different places and use them at various worksites. Although that's not a scenario the maker envisioned, it's easy to see how it might be possible soon.

Industrial companies often use robotic machines called palletizing cells to stack cases of products onto pallets. By doing so, they avoid putting employees at risk of the dangers of handling heavy items.

Gebo Cermex recently announced its CoboAccess_Pal, a fenceless, compact palletizing cell. Now, case handling occurs above a conveyor belt or the pallet station, eliminating the possibility of products falling onto employees. Plus, it can be moved with only one person and a pallet jack, and its system set up for the next task in under ten minutes.

That level of flexibility is ideal for large factories looking to meet their palletizing needs without investing in multiple pieces of stationary equipment. It's an all-in-one solution!

A bright—and portable—future for cobots

Cobots have already revolutionized robotics by working safely around humans and helping accomplish tasks with greater accuracy in less time.

Someday, cobots might be as mobile as construction crews are today. If so, they could be loaded onto trucks and travel alongside humans, who could deploy them for duty in an hour or less.

We expect the cobot adoption rate to increase as companies and industries realize their immense potential for portability. It's an exciting time for collaborative robotics!