One of the main goals of robots is to do jobs that are too dangerous for humans. In some cases it can be a repetitive task that might eventually lead to injuries. In some other cases, it can be a task that is directly in contact with a particular danger. In the case of the SAFFiR robot, it has been designed to help firefighters do their job by doing certain dangerous tasks.

As firefighting can be considered one of the most dangerous jobs in the world, it is natural to want to find ways to save human life or to avoid potential injuries as a result of this dangerous task. The SAFFiR project is all about helping firefighters in their everyday job. The project is a collaboration between Virginia Tech's  Terrestrial Robotics Engineering and Controls Lab (TREC), Extreme Environments, Robotics & Materials Laboratory and the U.S. Navy. The goal is to, eventually, better assist sailors in fighting fires, controlling damage and carrying out inspections onboard ships. SAFFiR is short for Shipboard Autonomous Firefighting Robot.

In the fall of 2014, Virginia Tech students created a short video in Mobile Bay, Alabama to demonstrate how their robot reacted to a fire in a naval situation.

The robot reminds me a little of the Boston Dynamics ATLAS, however the students from Virginia Tech seem to have started from scratch. With various departments working on the development of the robot, they appear to have incorporated very particular technology into the way the robot moves. The robot is designed especially with firefighting operations in mind. You can tell by its gripper that it is robustly designed to react to the force kickback applied by the hose during fire blasting operations. 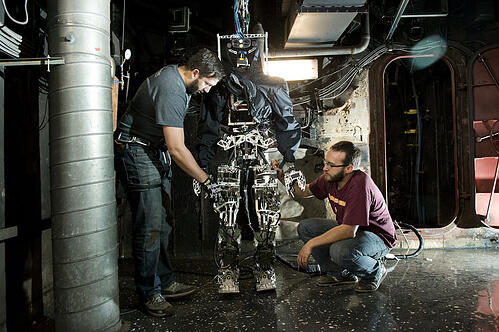 During a three-day demo in November 2014, students from the TREC and ExtReMe labs, along with faculty advisor, Brian Lattimer, an associate professor with the Department of Mechanical Engineering, prepped SAFFiR for a fire suppression test onboard the former USS Shadwell, a decommissioned ship in Mobile, Alabama, now used as a damage control research center to test new shipboard firefighting techniques.

Through a narrow hallway, SAFFiR was tasked — programmed by the two labs’ imaging and manipulation team — to walk towards a sailor, stop, turn, locate the heat source of a fire behind a door, and (once the door opened) take a hose and blast the flames with water, all without falling or stopping. 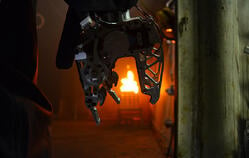 According to the video the robot is incredibly stable. When it bends on one side to transfer its weight from one leg to another, you can tell that there has been a lot of work put into its stability; lots of core robot exercises ;-). Another cool thing is the gripper. It is rigid in terms of its grip diversity, however that is most likely because it was designed for this one very specific application. You can see that there is a lot of geometrical design specifically geared to holding the hose or opening a door/valve specific to this special environment. I am really excited about the next iteration though and look forward to seeing this project develop complex solutions to help firefighters in their everyday jobs.

By Romy A Letourneau - September 23, 2019
END_OF_DOCUMENT_TOKEN_TO_BE_REPLACED