What are the Sources of Robot Inaccuracy?

Many industrial applications require accurate robots to achieve critical tasks, such as aeronautic manufacturing [1] and metrological inspection [2]. However, industrial robots do not often offer height accuracy. Robotic inaccuracy is attributed to several error sources, which are divided into three main categories: Active joint errors, kinematic errors and non-kinematic errors. By active joints, we refer to the articulated and actuated joints of a robot, since some joints are articulated but not actuated, for example in parallel robots, these are called passive joints.

[1] At the heart of the CSeries

We note that the active joint errors and the kinematic errors create the highest contribution to the lack of robot accuracy. As you can imagine, the non-kinematic errors have a higher impact on applications involving high payloads.

These errors represent the errors related to the displacement value provided by the encoders of the active joint(s) of the robot. They represent the differences between the movement reported by the sensor (i.e. an encoder) and the actual movement made by the joint. These differences are mainly caused by sensor errors themselves and the offset caused by the zeroing (or homing) of each active joint (i.e. the error in the zero or base position of the active joint).

The kinematic factors are related to the knowledge of the robot’s kinematic model. A model that doesn’t closely represent the actual geometry of the robot is a fundamental source of inaccuracy. The main causes of kinematic errors are summarized in the following: 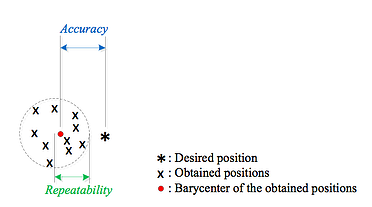 The non-kinematic factors are attributed to the mechanical characteristics of the robot’s components, which might be summarized in the following main elements:

Knowing where to look and how to reduce your errors and improve your accuracy for any industrial application that requires accurate robots to achieve critical tasks will surely improve your production results. Use of a force torque sensor to add precision to your measurements might be one way to eliminate these pitfalls. Since careful measurement at each stage of the application process, while this might seem tedious during set up, will no doubt payoff in the long run.