The idea of standards is to try and harmonize usage across many countries and often fields of use. The standards are thus written in many languages and these languages might use the same term for similar meanings, but they might also use the same term to mean different things. There is terminology for the standards and there is common usage terminology, which also could be the same or different according to the language. So lets look at some specific terminology for the English language, so that we can all be on the same page when talking about robotic technology.

The following terms have been taken from several sources, including the newly released ISO 13482:2014 definitions for personal care robots and what is most often sited as 'general knowledge'. I have grouped the terminology not alphabetically, but by subject matter, so distinctions can be more easily recognized between terms.

The robot arm with the end-effector used in industrial standards.

Actuated mechanism fulfilling the characteristics of an industrial robot or a service robot, but lacking either the number of programmable axes or the degree of autonomy.

Able to travel under its own control.

All the robot system(s) and associated equipment required to perform task(s) that are contained within a safeguarded space.

A robot designed for direct interaction with a human within a defined collaborative workspace.
Collaborative operation - where a worker is in the sphere of active interaction during an automated robot operation. Often where the operator directly loads and unloads the robot or manually drives the robot to a specific location.

The ability to perform an assigned mission(s) without direct human intervention.

Operational mode in which the robot function accomplishes its mission with partial human intervention, different from collaborative in that semi-autonomous requires human interaction to run the robot, where as with collaborative mode the robot is generally autonomous and the human is working alongside the robot and not directly involved in the control of the robot.

Usually a human or a person designated to make parameter and program changes, to start, monitor, and stop the intended operation of the robot or in the case of personal care robots this maybe the beneficiary of the service provided.

Device that enables the operator or a user to control the robot.

Human operated device connected to the control circuit. One or more manual control devices attached to a panel or housing form a command device.

Operational mode in which the robot is operated by direct human intervention via pushbuttons or a joystick. This mode is usually used for teaching, tele-operation, fault-finding, repair or cleaning.

The region of space a robot can reach.

Portion of the maximum space confined by limiting devices that establish boundaries which will not be exceeded by the robot.

Space observed by sensors available to the robot.

A workspace within the safeguarded space where the robot and human can perform tasks simultaneously.

Robot not confined with a safety fence. 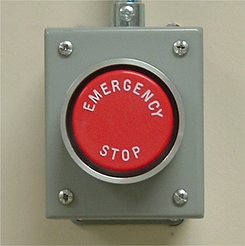 Used interchangeably, interruption of operation that allows an orderly cessation of motion for safeguarding purposes. A safety stop means that only the power to the manipulator motors is disconnected. There is no recovery procedure. You need only to restore motor power to recover from a safety stop.

Stopping the manipulator actions with power available to the motors, so that the manipulator path can be maintained. When completed, power is disconnected from the motors. Controlled stops are preferred since they minimize extra, unnecessary wear on the robot and the actions needed to return the robot system back to production.

Immediately stopping the manipulator actions by disconnecting power from the motors.
Kill switch or e-stop or emergency stop - is a safety mechanism used to shut off a device in an emergency situation in which it cannot be shut down in the usual manner.

Monitored stop or Safety-rated monitored stop - applies to a robot drive system that has built-in safety to ensure speed and/or torque is limited to a safe value. With this capability, the robot controller software and hardware have a safety-rated ability to limit the robot's range of motion. Hard stops, therefore, are no longer mandatory on new robots and controllers that have this ability.

A prescribed safety function with a specified safety-related performance, much more work needs to be done in this field to establish global safety ratings.

Inherently safe - commonly used to describe this new generation of collaborative robots. The inclusion of safety-rated technology with the robot and its controller is leading to new ways of using robots, and the belief is that the use of robots in manufacturing is only a small part of where they can be used. The expectations are that this will significantly increase the number and type of robots being sold.

Object, obstacle, or ground condition which can cause harm if it comes into contact or collision with the robot, may include humans, domestic animals, or property to be protected from harm.

From the automotive industry and includes all means of preventing an operator from getting injured or at least to minimize the injury consequences in case of a collision.
Software limits - restrictions to one or more operational parameters of the robot as defined in the control system can restrict operating spaces, speed or force.

This optional feature is available on new robots and may have different names depending on the robot manufacturer, but the functionality remains the same. Safety-rated software is used to control the robot motion so that restricted space can be more flexibly designed. Case studies have shown that this saves both floor space and cost in the system design.

Sets the upper boundary of force that a certain point of a robot can exert against a human, or other surrounding objects without creating an unacceptable risk. Standards are being worked on to establish criteria for this.

Assembly of devices and/or components working together for protective tripping or presence-sensing purposes, and comprising as a minimum: a sensing device, controlling or monitoring devices, output signal switching devices or safety-related data interface. The safety-related control system associated with the ESPE, or the ESPE itself, might further include a secondary switching device, muting functions, stopping performance monitor, etc. A safety-related communication interface can be integrated in the same enclosure as the ESPE.

Magnitude of the difference between the velocity vectors of the robot and an object (including a human) about to be touched. The robot velocity is the vector sum of velocities for the robot body and its moving parts.

This is a measure of the amount in angle or distance that a robot axis will move when a force is applied to it.

How closely a robot can reach a commanded position.

How well the robot will return to a programmed position. This is not the same as accuracy.

Some words are recognized by their common use meanings such as: risk, risk assessment, contact, unintended contact, allowed contact and hazard, which are all given standard dictionary definitions. What terminology we use determines many things especially our attitudes. So having a positive common language about robots is important for societal acceptance. So designing 'protective stops' instead of relying on a 'kill switch' is probably a good place to start.