The difference between payload and grip force is often misunderstood. Since the selection of these two parameters for robots and end effectors is really important, it is crucial to understand the difference between them. It is also important to calculate them properly in order to make accurate choices and decisions for your applications. This article gives you the opportunity to clarify these concepts. 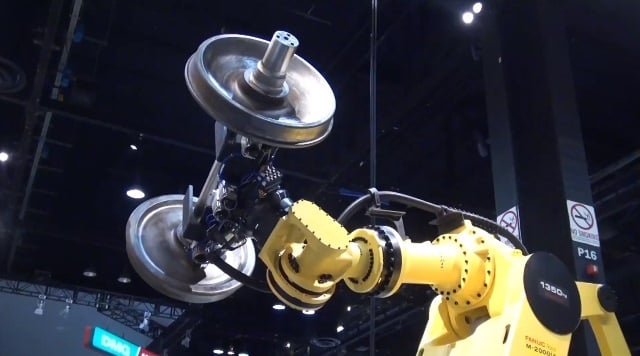 This parameter is the maximum mass that can be attached or supported by the wrist of the robot arm (J6 axis for Fanuc, T axis for Motoman, etc.). A payload is usually expressed as a weight unit (kilograms [kg] or pounds [lbs]). This parameter will include the mass of the end-effector and its bracket and will also include the mass of the object that must be moved by the robotic arm. Robotic welding applications should also consider the payload as a parameter for robot selection. For example, an arc welding torch is lighter than a spot welding gun, which will result in a different payload total. Therefore, the robot selection might be different for these two applications. Generally, the payload is given by the robot manufacturer. Make sure you consider every single part that can be attached to the wrist of the robot arm in your calculations. It is also a good idea to add a supplementary security factor to ensure that the total mass that must be moved is slightly lighter than the maximum payload. Notice that an end effector can also have a recommended payload, which should guide you in selecting this tool.

Gripping force is the maximum effort applicable by the end-effector. As robot grippers are not all alike, different terms exist. Grip force is normally used for claw-grippers, representing the force that the “fingers’’ can apply on a part. In other cases, magnetic or suction force can be used for applications requiring pneumatic or magnetic end-effectors. This parameter is normally expressed as a force unit (Newtons [N] or pound force [lbf]). The grip force is usually given by the robot gripper manufacturer. At this point, the difference between payload and grip force should be noted. In fact, a robot arm cannot have a gripping force, it is the robot gripper itself that is applying a force on the object to retain it from slipping, especially during movement.

How to Calculate the Minimal Gripping Force

F: Gripping force [N]
u: Coefficient of static friction
m: Mass of the part [kg]
g: Gravitational acceleration [9.81 m/s^2]
a: Acceleration (if it is significant)

To make sure the part doesn’t slip during static prehension, the gripping force should be higher than the weight of the part itself.

2 More Tips about How to Calculate the Minimal Gripping Force

With these few tips you should now be able to differentiate between payload and grip force. Calculating each of these parameters correctly can also be crucial in the selection of the robot that you are considering for implantation in your workshop. Making the right tool choice is always important and should help you save time and money at the end of the day.