The new collaborative robots are meant to work alongside humans to help them in their production tasks. This new type of industrial robots can be used to do the monotonous jobs, as well as the hazardous ones. These new kinds of robots are easily implemented on the production line. They make automation accessible to small and medium manufacturers via their low cost. They are also synonymous with flexibility, since they adapt to any type of task with little effort. However, an important feature to consider is safety. Since robots are no longer separated from human workers, their safety features become a priority.

In May, the Robotic Industries Association (RIA) announced a new robotic safety standard which would include the new collaborative robots for the industrial world. This standard has been approved by the American National Standard Institute (ANSI). The main concern of this new standard is human-robot collaboration.

According to the standard ANSI/RIA R15.06-2012, robot collaboration with humans can be describe in 5 types of applications. 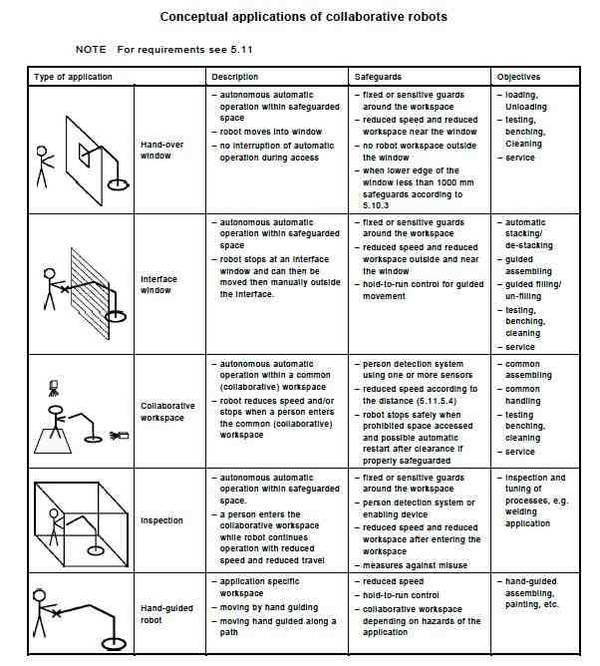 The standards specify that a robot working in collaboration with a human needs to meet at least one of these four criteria: Safety-rated monitored stop is about stopping the robot if a human enters its collaborative workspace. It is often made using one or more sensors to detect human presence.

Hand guiding allows the robot to move under someone’s control. The robot is still powered, but the workers are still protected, since the robots movements are under control.

Speed and separation monitoring are meant to adjust the movements of the robot according to where the human is located. When someone enters the collaborative area, the robot will slow down its movements to the reglemented speed. Then, if the worker moves nearer, the robot will eventually stop. In this kind of system, the real challenge is about monitoring people and robots in real time to avoid any collision.

Power and force limitation are the most widely applied aspects of collaborative robots. If a contact occurs, the robot will limit its force, in order to not harm the person. Different methods are used to achieve this, such as: current monitoring, force-torque sensors, compliant joints or intrinsically safe design through low-power actuators. However, it is good to mention that some body parts are more sensitive than others. Safety has always been a major concern in manufacturing industries. Even if robots have been in this industry for decades, it still important to do risk assessment for each new robotic application. Nowadays robots are used in different ways than in the past, so it is very important, even if a collaborative robot is used, to study all the risks of working beside or with it.

To conclude, collaborative robots are here to help small and medium sized companies to improve their production through automation. Easily installed and programmed, they are a great solution to start automating your process, but always in a safe way.