Robot Giving a Hand to Make... a Robot Hand!

Bringing humans and robots together in the same working environment is a big research and development theme across the global robotics community. The promise of robots that are safe for humans will shift the paradigm about industrial robots from "programmable machines autonomously executing structured tasks" to "collaborative devices working with humans to complete loosely structured tasks". Instead of being considered like machinery, these new robots will be seen as a new generation of intelligent co-workers with whom human operators can intuitively interact to be more productive. Industrial platforms are not mature enough yet for extensive deployment, but the video below gives a preview of how a robot and an operator could collaborate to do fine assembly, for example at a robotic hand manufacturer, SME.

You can also download the video of the Kuka Light Weight robot with a robotic hand.

Human-Robot Collaboration: Why is it Interesting in Assembly?

Fine assembly is still a very challenging task for robots. The combination of sensory and fine motor skills that humans possess are extensively used in these tasks. This explains why there is a lot of room for automation in fine assembly. At any automotive car manufacturer for instance, you will see very few humans, but many robots doing the welding and painting. On the assembly side of the plant, it is the opposite situation.

Considering that robotic capabilities will not be available in the short term to fully automate these fine assembly tasks, why not instead have collaborative robots helping humans so they can keep adding value continuously? In a factory, we want the operations that add the most value to the final product to be continuously running. In assembling, a worker adds value when he is putting parts together to make the product. Moving parts around or picking parts does not add value, so let's have a robot do this.

Kuka LWR Robotic with a Robotic Hand as a Co-Worker 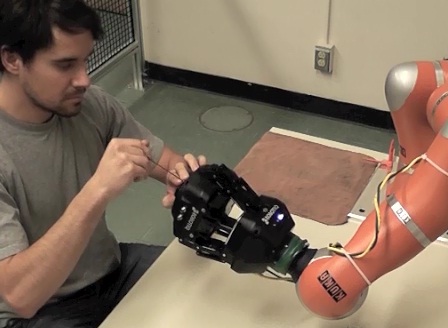 The KUKA Light Weight Robot has many interesting features that make it suitable for human-robot interaction. Here are a few examples:

In the video, the robot does several things so the human keeps assembling:


About this human-robot collaboration demonstration

The Laval University Robotics Laboratory acquired Adaptive Grippers and a Kuka LWR to pursue their work on human-robot physical interaction. As they were still setting up the equipment in the lab, we did with them this quick demo to show how the LWR equipped with one of our grippers can become a human helper in high-mix assembly tasks. You can view a similar demo done by the European SME Robots Research Consortium.