The Evolution of the Robotic Teach Pendant 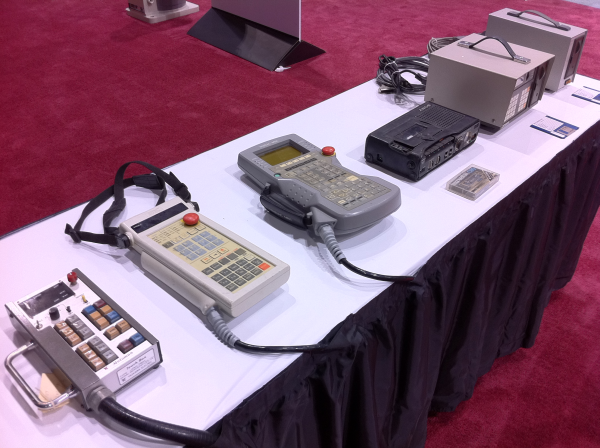 The teach pendant is the most common interface to program an industrial robot. The above picture was taken in the Tribute to 50 Years of Industrial Robotics at Automate 2011. I was impressed by how rudimentary the first pendants were compared to what they look like today. Even more impressive were the memory devices upon which the robot programs were recorded. Looking at the magnetic tape tells me that early roboticists must have been very patient people...

Still, the concept of the pendant remains the same today. For example, the big red button they all have has always been there. One thing that the early pendants had was simplicity. They have evolved to become almost a machine unto themselves - loaded with buttons and functions. I can imagine the stress they can cause a worker in manufacturing that needs to start programming a robot today without previous experience. And for very demanding tasks, some hardcore programming is still required.

What is the future of robot programming?

I cannot predict the future but let me throw out a few ideas.

How do you think the robot programming will evolve?