6 Industries That Have Been Improved by Robotic Automation

Automation is becoming more prevalent in many sectors of society. Here are six industries that have benefited from this technology.

Analysts say without help from automation, the automotive industry – including prominent companies such as General Motors – would have had trouble bouncing back from the Great Recession.

Robotic automation helps auto-making plants deal with labor shortages. In many facilities, robots work next to humans and help people get more done in less time. The bots also have built-in safety features that stop them from moving whenever humans get too close.

Consumers have an ever-growing demand for smartphones, flat-screen TVs, earbuds, and tablets, among other gadgets.

China, in particular, has capitalized on robotic automation in the electronics manufacturing sector. Between 2013 and 2014, the number of robots working in that industry more than doubled in China. 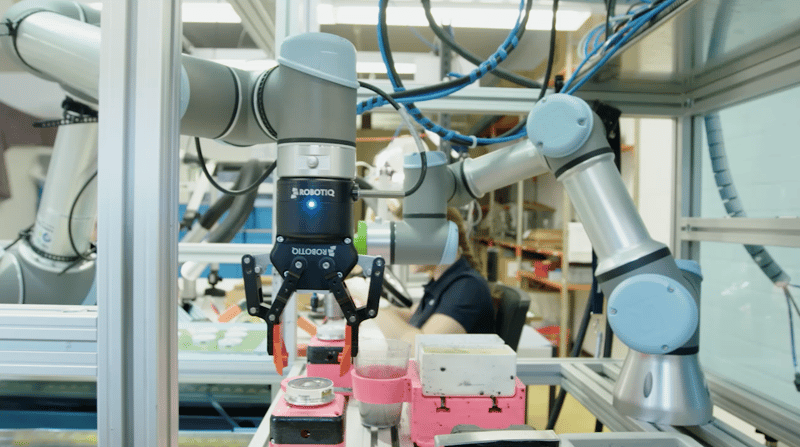 Beyerdynamic has integrated robots to help with repetitive tasks on the production line.

In Germany, Beyerdynamic, an audio accessories manufacturer, faced the daunting goal of increasing productivity on the factory floor by 50 percent over four years.

It implemented the Robotiq 2-Finger Gripper and Wrist Camera to pick up speakers and place them in a dedicated area where the pieces get sprayed with glue.  A second robot, the Universal Robot UR 5, handles the glue-spraying task.

Together, the two robots increased the production rate by 50 percent. Plus, human workers at Beyerdynamic report that despite the factory's limited floor space, it’s easy to work alongside the robots.

They now have plans to train the specialized machines for other responsibilities, such as inserting screws and handling the final assembly of products.

Indeed, one of the advantages of cobots in factories is that they're becoming capable of great task-to-task variability, which makes them immensely useful for companies that want to cut costs.

Increase your production rate with the Scredriving Solution
Click here!

Health facilities have also benefited from automated robots. In the San Francisco Bay area, one hospital is using dozens of robots, called TUGs, to transport supplies and medications.

Last year, a robot helped with a delicate eye surgery involving retinal growths for the first time. Doctors had previously done the procedure without automation, but that approach is risky, because even the blood pumping through a surgeon’s hands is enough to affect the accuracy of an incision.

Although welders still use manual processes to fuse pieces of metal together, many welding companies have discovered how robotic welding equipment reduces waste and delivers fast, high-quality results without direct human involvement.

Onken is a welding company that felt the pinch of the labor shortage and used automation to ease it. After installing the Japanese-developed Motoman Robot, the company doubled its output and transitioned several of its welders to other tasks.

The use of robots in food services is a fast-evolving concept. Due to factors like new minimum wage requirements and the rising cost of raw materials, restaurants increasingly use robots to make tasks more uniform and efficient, whether they're preparing salads or flipping burger patties.

At chain restaurants in particular, people expect an identical experience whether the outlet is in Texas or Taiwan. Automation is helping meet that goal, thanks to robots that perform without fail while carrying out the orders built into their programming.

In the first half of 2016, 201 robots were transferred from military service to local law enforcement agencies. Some people are understandably concerned about using robots for policing purposes, but the bots used today in the United States don’t typically demonstrate deadly force.

Instead, they primarily defuse bombs, gather details about dangerous situations, and report back to the human police officers who will carry out further investigation.

Some robots in development can take on neighborhood watch duties and record alleged incidents of noise violations, public drunkenness, etc., then provide those insights to human officers.

In Australia, the Dragon Runner robot ventures into confined spaces to check for explosives. There’s also the TEODOR, a remote control-operated robot designed to completely replace humans during dangerous missions such as assessing suspicious packages.

What’s next for robotics?

Robotic automation is applicable to virtually any industry imaginable. As this list shows, today’s machines work next to humans, freeing them to handle other tasks and curbing labor shortages.

Will the uses above soon become even more common? The rapid pace of progress is enough to make anyone curious about what’s ahead for robotics!