What's the Best Position to Store Your Robot Overnight?

It's a common question. Users are often concerned that they are storing their robot in the wrong position and could damage the motors. Here's some advice on how to store your robot the right way. 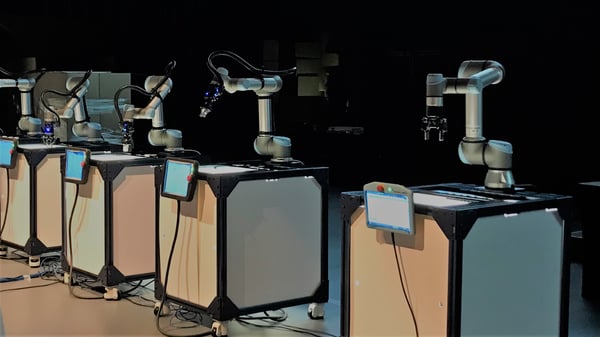 The lifetime can be shorter if you don't treat the cobots properly.

I used to work with a big, heavy hydraulic robot. When you turned off the hydraulic supply, the robot would slowly deflate like a punctured bouncy castle. We had two options for storing it: hanging straight down or lying on a table. That was it. Gravity decided where the robot would stay.

It's not like this with all robots. Many robots stop wherever you leave them, including electric collaborative robots. If you leave the robot with its arm outstretched, it will still be in the same position when you come back in the morning.

Newer users are sometimes concerned that they will damage the robot by leaving it in a position overnight. Intuitively, it feels like the motors must be doing a lot of work to keep the robot in that position, right? As one user on the DoF forum asked recently, "Should I always put my UR in home position to "prevent wear"?"

The short answer is "not necessarily", but there's more to it than that…

What happens when a robot powers down

Although every robot is different, there are similarities in what happens to most electric robots when they power down. Let's take a Universal Robots UR10e as an example.

When you turn off the power to the robot, a brake is engaged at each joint. This brake holds the joint in position without requiring the motor to do any work at all.

With the UR10e and other UR robots, it is still possible move the robot when the brakes are active and the robot is powered down. This is known as "forced back driving" and requires you to push the robot quite firmly to overcome the friction of the brake. This is impossible with many large industrial robots as the brake is too strong.

However, even with UR robots, forced back driving is not recommended except in emergencies as it can damage the joint gear box. In normal use, you are much more likely to use "active back driving" which involves temporarily releasing the brakes by pressing the Teach button on the teach pendant when the robot is powered up.

Almost all robot joint brakes operate in the same way. Each joint contains a clutch which is engaged whenever the brakes are activated or power to the robot is lost for any reason. This clutch contains two high-friction surfaces which clamp together and resist any movement of the arm. As the clutch provides all of the stopping torque, the robot's motor doesn't have to work to maintain the position of the arm.

The mechanism to engage the clutch varies in different robots but the two most common types of brake are:

The two situations where joint brakes are most often applied are:

Do the robot joint brakes wear down?

Yes! Like all friction brakes — including the clutch in your car — it is possible for the joint brakes to wear down.

It is for this reason that the question "What is the best position to store my robot?" is a good one. After all, it makes sense that you don't want to store the robot in a position which would unnecessarily wear down any part of the robot.

Think about the clutch in your car. It lasts a long time but eventually it can wear down. Robots use the clutch much less aggressively than a car does, but they still have a lifetime. This lifetime can be shorter if you don't treat the brakes properly.

I can think of three situations which could cause the joint brakes to wear down more quickly:

The key word in all of these is "often". Any of these things could happen and it wouldn't damage the robot. However, if they are happening all the time, the clutch will start to wear down.

6 ways to avoid wearing down your joint brakes

Thankfully, there are simple ways to avoid those the three situations:

Should you put the robot in home position?

Hopefully, you can now see that most collaborative robots can be stored in any position. The brake will provide a huge amount of stopping torque. In most positions, this torque will be enough to hold the weight of the robot arm with no ill effects.

Having said that, it is probably a good idea not to store the robot in an extreme — completely horizontal — position (as David Garipy advised in the DoF forum). In an outstretched horizontal position, almost all of the joint brakes would have to work against gravity, which would provide a higher torque onto their clutches. This torque would be even bigger if the robot was holding a payload — e.g. a heavy end effector and/or sensor.

To be honest, even in this extreme situation the robot could probably stay in this position for a long time. However, you don't need to store your robot in this position, so why do it?

If you want to reduce the wear on your joint brakes to a minimum, store the robot in a reasonably neutral position… but don't worry about it too much.

How do you store your robot? Tell us in the comments below or join the discussion on LinkedIn, Twitter, Facebook or the DoF professional robotics community.