RS485 vs Ethernet: Which One is Most Used in Industry? While Ethernet is the most commonly used communication protocol among multiple types of devices, ranging from consumer gadgets to industrial devices, TIA/EIA-485 commonly known as RS-485 is still broadly used in industrial devices even if it is older than Ethernet. Let's see why it is still in use and why, at Robotiq, we decided to use it as the standard communication protocol for our devices.

Many people are often confused when dealing with communication standards. Often, terms like ''RS-485'', ''USB'' and ''Ethernet'' are interchanged as if they could be switched and do the same job. But in fact, the RS-485 standard is only a physical layer standard. It defines the electrical characteristics of the transmitter and the receiver. On top of that, an application layer must be used to handle stuff like device addresses, checksum, packet collision, master/slave topology, frame construction, etc. In the case of Ethernet and USB, these protocols define both the physical and application layer in their communication standard.

If you're lost at this point, let's make an analogy with human communications. As humans, we use our voice as a transmitter and our ears as receivers. This is our physical layer, the way we transmit information. Another example of a physical layer in our digital era could also be SMS that transmits our messages. It is still a physical layer from our perspective. The application layer in the case of humans is language. This is how we organize information. There are hundreds of them and even if they use the same physical layer, they are not necessarily compatible.

Ethernet (IEEE 802.3) is the most broadly used network protocol these days. It is also a serial communication standard. Since it is used in so many modern networks, the question is why hasn't it replaced RS-485 and its other variations (RS-232, RS-422).

When comparing RS-485 with Ethernet both of them have advantages and disadvantages. The major drawback of RS-485 is its limited communication speed which is maxed out at 10 Mbaud. RS-485 is designed for a master/slave topology. In this system, the master polls each slave, waits for the response, and then polls the next slave. This allows a deterministic behavior by avoiding collisions of data packets. Ethernet however has no built-in methods to avoid data packet collisions. In applications like process control or robot control, for us, the deterministic behavior is mandatory while the speed of the communication is usually more than high enough. Communicating at lower speeds also has the advantage of being more resilient to the noise present in industrial environments.

Forewarning : In standard applications where a Robotiq device is connected directly to a robot controller through the cable provided (normally 5 or 10 m) and where the Gripper is the only device on the communication bus, no special care is generally required to make the communication bus work. But for people who intend to attach our product to a custom bus or use a longer cable than provided by Robotiq, you should pay attention to the following concept.

RS-485 is capable of up to 32 drivers and up to 32 receivers in a half-duplex multi drop configuration. Receiver input sensitivity is ±200mV, which means that to recognize a 1 or a 0 bit, the receiver must see signal levels between +200mV and -200mV. Minimum receiver input impedance is 12kΩ, and the driver output voltage is ±1.5V minimum, ±5V maximum. Here's an example of a multi drop RS-485 bus.

RS-485 can be transmitted at a distance of up to 1200m (4000 feet) when the data rate is below 100k bps. At higher data rates, the cable length must be reduced as shown in the chart below. 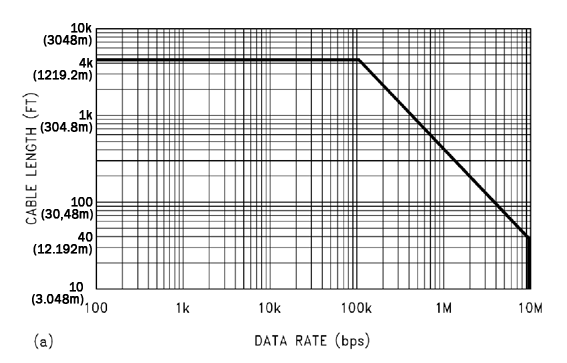 A long cable can act like a transmission line, in which case, care should be taken to properly connect the network. Let's look at the most important characteristics of the network that need to be accurately controlled.

The network topology determines the way devices are connected together. The image below shows some common topologies. Among these possibilities, the best network topology for RS-485 is a daisy chain (or line), because this topology has the lowest impact on signal integrity. A bus topology (backbone using stubs) is okay, but as the length of each stub increases, the maximum data rate that can be transmitted will decrease due to signal distortion on the communication line.

Using a twisted pair cable for RS-485 helps to reduce electromagnetic interference. The twisted pair allows the noise that is on the line to be equivalent on both wires. The noise is still there, but because the receiver looks at the difference between the two signals, this difference is not affected by the noise and thus the receiver can accurately reestablish the original signal at the end.

Terminating a cable is the action of adding a resistor across the differential lines at both ends of the cable. The purpose of doing this is to reduce or eliminate the reflection coefficient on the line caused by an impedance mismatch. The resistance in the case of the RS-485 standard is define as 120 ohms. This reflection can lead to interference at the receiver input and then effect the signal integrity. This phenomenon is strongly correlated to the data rate and the length of the cable. So in some circumstance where low data rates and short cables are used, a RS-485 can work without a termination resistor. But as a precaution and to avoid any problems, resistors should always be used.

We decided to standardize our products by using RS-485 back in 2013 for many reasons, but mostly because it is resistant to noise, simple and effective. It is also a broadly used protocol among industrial devices which means that resources can be easily found on the web. Robotiq devices like the 2-Finger 85 and the FT 150 come with RS-485. Modbus RTU is used as our communication protocol. These devices have a termination resistor that can be activated easily through the User Interface Software that we provide. In addition, we support many other industrial protocols with the Robotiq Universal Controller, such as: Ethernet/IP, TCP/IP, DeviceNet, CANopen and EtherCAT.

Hope that you have found this blog post informative and that it helped you out with understanding just what a RS-485 is. If you want to learn more about the different communication protocols, we have complied a ''Communication Protocol Cheat Sheet'' that can be downloaded by using the link below.

Written by Sebastien Bélanger
Sébastien is an electronic designer in the R&D team at Robotiq.
Connect with the writer:
http://www.robotiq.com

By Romy A Letourneau - September 23, 2019
END_OF_DOCUMENT_TOKEN_TO_BE_REPLACED