What is Robot Cell Deployment? (and what it isn't)

What's the difference between robot cell deployment and systems integration? Here's the definitive guide to this core Lean Robotics concept.

Lean robotics is a new method for efficiently integrating robots into your manufacturing business (find out more at leanrobotics.org). It is designed to make the process of robot cell deployment quick and easy.

But, what is robot cell deployment? What does it mean?

You might have heard of the term "robot systems integration" before, but cell deployment is a little different. In this article, we draw clear lines around the different concepts so that you can stop getting tied up with terminology and start incorporating robots into your business.

What Is A Robot?

First things first, what do we mean when we talk about a "robot?" In Lean Robotics, we use the term to refer to everything that the robot manufacturer provides when you buy a robot arm. That is:

That's it. These are the only three components necessary to program the robot and make it move. Although you may be able to use them to complete tasks you usually need more components. That's where a robot cell comes in…

What Is A Robot Cell?

A cell contains everything that is needed for the robot to perform a particular task on your manufacturing line. As well as the components listed above, these might include:

Robot cells can also include multiple robots. For example, the classic image of robots working in the automotive industry (e.g. a line of many identical robots all painting car parts) could be seen as a single "robot cell." However, we tend to consider cells with only one robot because it helps to reduce the complexity of robot deployment. 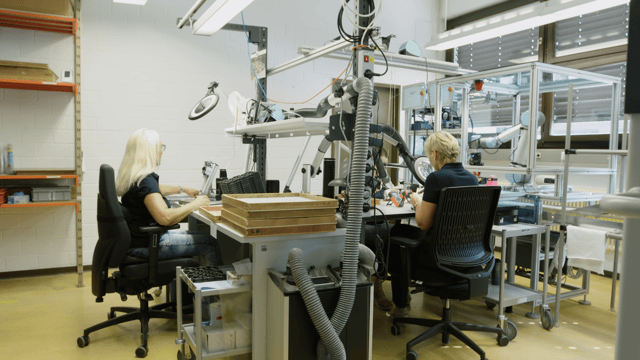 What Is Robot Cell Deployment?

So, now we know what a robot cell is. How do you deploy one?

Robot cell deployment involves bringing together all of the components of a robot cell and configuring them into a functional manufacturing cell.

In Lean Robotics, we split deployment into three distinct phases. This is a little different from the systems integration which is usually used in manufacturing businesses (I'll explain this further in a moment).

The three phases of robot cell deployment are:

The purpose of this process is to make cell deployment as easy as possible. Each phase has clearly defined inputs and outputs. The Lean Robotics methodology has been developed so that you can carry out the whole process yourself, without external integrators.

What's the Difference Between Robot Cell Deployment and Systems Integration?

These days, most robot cells are deployed by external integrators. These are specialist contractors who are skilled in robot integration. The theory is that your company hires them to add robots to your line and they do all the work for you.

However, it's not quite as simple as that…

Robot integrators only perform two of the phases of robot cell deployment: Design and Integrate. The work that they do is known as "systems integration." They do not get involved in the Operate phase because this is up to your team. Also, during the Design phase they require input from you and your team. As a result, you still have to put quite a lot of work.

Although integrators save you time during the Integrate phase, this approach has one big disadvantage — it means that your team cannot update the robot easily themselves. If you want to improve your robot's operation, even by a small amount, you have to call up the integrators again. This can outweigh the time saved during initial integration, especially when you are using collaborative robots which are easy to program when you know how.

Robot cell deployment, as we define it in Lean Robotics, includes all three phases. It also includes the training which you will need to ensure that your team can operate and reprogram the robot themselves.

To wrap up, here are all the different terms we've covered in this article:

How to Find Out More About Lean Robotics

Lean Robotics is a specific application of Lean concepts to make sure your robot cell deployment a success.

You can learn more about Lean Robotics by going to leanrobotics.org and grab a copy of the book while your there!