Fusion OEM specializes in part machining for customers in the midwestern USA. This high-mix, low-volume factory operates 14 CNC machines. Employees found a way to increase productivity by adding four Universal Robots, equipped with Robotiq’s Hand-E, Force Copilot, and Insights, over the span of a year. Running a job with this setup is now four times cheaper than operating manually.

In a time when fear of robots stealing jobs is common, if mistaken, here’s a story on how employees brought the idea of robots to their managers.

“Running a job on a given machine with Universal Robots and Robotiq is four times cheaper than operating manually.”

Fusion OEM’s Head Machinist Davin Erickson had already been following top CNC machining channels on Instagram and Youtube for years. Always looking for inspiration from other machinists, he was impressed when he first saw a robot operating a machine without caging. “We then began to see these collaborative robots everywhere on social media and at trade shows” he recalls. “We tried to convince our CEO that this would be great for our factory. It took a few tries, but since it was very difficult to find good human help around here, we finally welcomed our first robot in the summer of 2018.”

Empowering his people is what made CEO Craig Zoberis decide to go ahead with Universal Robots and Robotiq as partners for his collaborative robotics project. “I read this Lean Robotics book, written by Samuel Bouchard, which taught me many things—but the most important is that robots help fulfill human potential. So instead of having our staff loading and unloading machines every ten minutes, they can focus on machine programming and any other value-added tasks.”

“There’s more consistency in the loading. It’s taken away some of the human error.”

Four robots were deployed at Fusion OEM within less than a year. The automated application starts with parts—presented on a nesting system—being picked up by Robotiq’s Hand-E Adaptive Gripper (single or dual setup), which is mounted on a Universal Robots UR5e or UR10e, depending on the machine’s requirements. Then, the gripper opens the door and inserts the part into the chucking system with precision using Robotiq’s Force Copilot software. The robot then closes the door and sends a signal to the machine to start the cycle.

Robotiq’s Hand-E Adaptive Gripper, made for precise part insertion with an IP67 rating and customizable fingertips, proved to be a perfect match for Fusion OEM’s machine-tending operations. “We’re able to connect the grippers directly to the robot’s wrist, get feedback on position and force, and know if there’s a part where there should be one and if it’s the right part,” says R&D Manager Stephen Milchuck, who only needed a few minutes to begin operating Hand-E with its software interface when he first tried it.

“With just one or two lines of code through Force Copilot, we let the software generate all the part positioning.”

Inserting a part into a machine chuck requires many programming steps, especially when using the robot’s force control for better accuracy and repeatability. “The program was getting pretty big because we were trying to have the robot accomplish all movements through different axes to place the part,” recalls Jacob Miller, Engineering Manager at Fusion OEM. “Then by adding one or two lines of code through Force Copilot, we let the software generate all the part positioning in a much faster and simpler way.”

This new application quickly proved its value. Fusion OEM Chief Operating Officer Ken Chess started gathering data on the company’s most frequently recurring order. “We often do lots of around 500 parts for this customer. Before the robots arrived, it would take almost 6 days to deliver. But now with the cobots running overnight, it takes 3 days, and our defect rate has gone down since robots make fewer mistakes than even the best machinists out there.”

Fusion OEM relies on Robotiq’s Insights monitoring software to send alerts to  employees’ phones and emails if production stops for any reason. If an employee is off-site, he can even log-in remotely to solve the problem. “We also get predictive signals that tell us when a raw part supply is almost empty. With all these tools helping us maximize runtime, we get a much better margin on the job,” says COO Ken Chess.

What started as an exploratory project quickly proved itself reliable. “We monitor the productivity of each robot with Insights data. We can spot areas of improvements for those robots and plan accordingly for future robot deployment” explains Ken Chess.

“Insights helps us maximize runtime, and we get a much better profit margin on the job.”

The numbers are there. For example, Chess evaluates that running a job on a given machine with a Universal Robot is four times cheaper than operating manually. The addition of robots has been great news for Fusion OEM employees. Those new robotic team members are actually helping all their human colleagues. Machinist Brian Wroblesky says he can spend more time on added-value tasks, such as programming machines without having to load them: “There’s more consistency in the loading and unloading of the parts. It’s taken away some of the human error.” 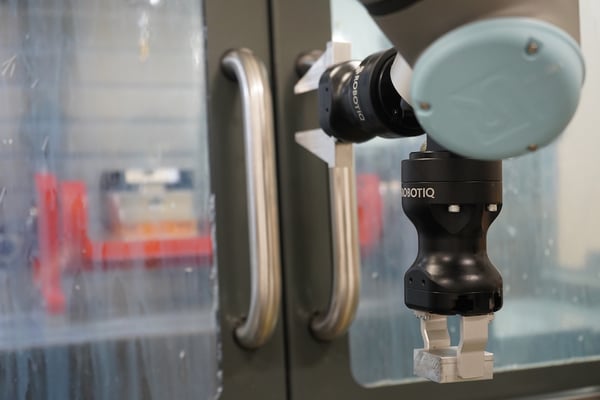 Ease-of-use is another major plus for Fusion OEM employees. Production Supervisor Chris Wenzel had seen a lot of industrial robots before, and was impressed with the Robotiq-Universal Robots offering:  “Compared to cobots, it’s totally night and day. The programming, the interface… everything is easier. Now we talk about each program in terms of minutes, rather than hours.”

Humans and robots are getting along pretty well. For Machinist Jenny Kim, these new robots are just like any other equipment inside the shop: “I call them brobots because they’re like your brothers. You have to treat the machines kindly. Respect them and they respect you back.”

Work is far from over for the Fusion OEM team. The goal now is to have all 14 Haas CNC machines tended by robots by early 2020. Zoberis relies on the lean robotics methodology to standardize his robotics project and scale faster. “I wish I had read Lean Robotics before. It would have saved me so much time and money spent on design. We have since learned to start simple, get small wins, and stop over-complicating things. This book is our bible now.”

Within the next year, the team members hope to double production capacity, increase machine uptime and—above all—continue to maximize their human potential.