Robotic collaborative applications are mostly related to robots working autonomously alongside humans. The robot is helping the worker to execute a task to allow for a better precision or a good repeatability. But in order to prevent ergonomic injuries, researchers are looking for ways to reduce the bio-mechanical stress load on the human body.

This is one project the Arts et Métiers ParisTech graduate technical university is working on. They are developing a way for workers to use a robot in real-time without using a keyboard or a joystick, but by directly interacting with the robot through the use of their hands but without direct contact with the robot. In fact, thanks to Leap Motion technology, the user can use the robot and its gripper without touching it. 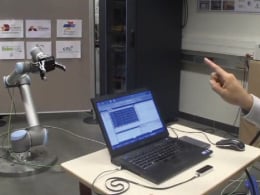 The project is using a Universal Robots (UR10) paired with a Robotiq 3-Finger Adaptive Gripper. The interface between the user and the robot is Leap Motion. This device is basically a sensor that recognize a human's hand motion. This can be compared with a Microsoft Kinect. They are using the signal transmitted by Leap Motion to control the robotic cell. What is cool about this is that not only is the robot controlled by the vision sensor, but the Gripper is too! This allows the user to direct the complete cell by using only his/her hand motions.

The project's goal is to the reduce the stress exerted on the human body due to the interaction heavy objects exert on a worker's musculoskeletal system. By only using hand movements, the user has virtually no stress in his body and can handle objects of up to about 10 kg with this set up. The laboratory is currently working on increasing the sensibility of the robotic cell. They also want to introduce tactile sensors to give a sense of touch to the robot. By doing so, the loop would be complete, since the user would have more feedback and be able to control the operations more precisely. Note that the current precision of the system is claimed to be under a millimeter which is really not too shabby. Though the use of tactile sensors would allow for more precise remote control of the force being applied by the fingers. Presently you can control the force being applied by the fingers in the robot program.

The project will be promising in terms of industrial applications, but if we push this application a little further, we can readily see medical assistance applications as well. So, imagine that someone who is partially paralyzed and can only use their hands could have a collaborative cell with them to be able to grasp things. This could then be a game changing technology for fields other than industrial automation.

The French tech schools includes 8 graduate level university campuses or Teaching and Research Centers, as they call them, and three institutes that are spread out around France. Their mission is to train engineers in mechanical, energy and industrial fields. It is at the Lille Campus that they are developing this project on one of their 2 technological platforms for agile production. The contactless gripper control is included in their Agile Plant Project and is considered a real working collaboration laboratory between, students, researchers and the robotic market.