The popularity of Universal Robots is undeniable. You may ask yourself why this robot is so popular in the robotic market. The main answer is quite simple: It is flexible and simple to use! The same robot can be used for a wide range of applications from collaborative applications to CNC loading operation. The UR is very versatile and has good specifications for light applications.

The UR platform is a 6-axis force limited robot available with a 5 or 10 kg payload which means that the robot is designed to work alongside humans. In fact, the robot can detect if a collision is about to occur and shut down to reduce the force of its impact. It is also easy to use and program. With a very user-friendly interface, the robot can be hand-guided and reproduce the same path for multiple manipulations. Here are a few primary examples of what the UR can do. 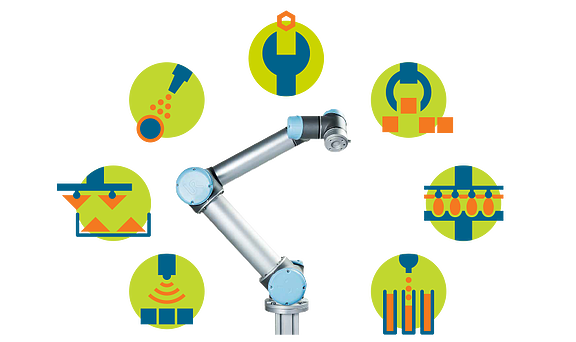 One application basically involves feeding a CNC machine. The robot is generally located beside the CNC machine and its job is to place the raw part in the machine and remove the machined part after this stage of the process has been completed. Most of the time, the robot has a pick layout and a place layout. The robot can determine the required position incrementally and literally execute a matrix of picking and placing options.

"The employee who used to operate the CNC machine can now oversee the work of other machines without any added stress. What is more, he can now devote his full attention to quality control. " - Fries Machinenbau Owner

The advantages of using this robot for this type of application is the speed of the programming. It is really easy to program for ''first-off'' parts. This means that even new parts can be loaded in the machine by the robot with very little effort from a human co-worker. This allows the worker, because he is not busy feeding the machine, to be more focused on the inspection of the parts or other skilled tasks such as planning or machine maintenance.

Quality inspection requires different functionality. We have seen applications where products where tested by robots using a constant repeated force in order to determine the behavior of the product after a given number of cycles. Quality inspection can also be done while doing assembly tasks. In fact, a UR paired with a vision system and other monitoring tools can insure good product quality repeatability. This could save a lot of time because it would reduce the amount of inspection time needed after the operation so that the product can pass from the assembly line directly to shipping and doesn't need to be delayed in the inspection department. This enhances the production line and can help you achieve or improve your lead time goal.

To see the complete case study follow this link.

Compact design, easy to use and no need for fencing are the key in most of these applications. In pick and place applications, using a UR is sometimes a question of saving space. In fact, not using fencing can make the design of a production line a lot easier. Even if the robot doesn't work directly alongside humans if such a situation might occur, the robot can react properly.

Productivity is always an important point when talking about introducing robots into a plant. This company is using two Universal Robots which has saved it a lot of time.

"UR robots are so simple to use, and not having to build a fence around them is a big plus. We have already saved three man years of monotonous work, thanks to our two UR5s," says Sigurður Runar Friðjónsson, Director for the Akureyri dairy.

With the introduction of force torque sensors, like the Robotiq FT 150, it is now easier to perform assembly tasks with a robot. When flexible devices such as Universal Robots and Adaptive Grippers are paired together, a virtual infinity of assembly motions and operations can be combined to create the necessary assembly tasks. The advantages of using a UR to execute such tasks is that it can be programmed using hand-guiding. There is no need to have a programming specialist to execute these tasks. So even with with a very small assembly batch, the robot can still be useful. With the introduction of the force torque sensor and its feedback, the robot can execute assembly tasks and know if the part is being inserted correctly. This gives greater capability to the robot and allows it to have a more repeatable process. Note that UR already has embedded force torque sensors in its arm, but using an external one on the end of the arm, right in front of the tool, increases the precision of the force reading for the robot tool.

Well, this would seem to be obvious. Since the Universal Robots are collaborative robots (a.k.a. force limited robots) it would be strange if they were not predominately used in collaborative applications. Especially as this robot is easy to install, relatively cheap and has a good payload. So most of the applications that are executed with these robots are applications that require collaboration with humans. And since it is force limited, it is designed to work alongside humans. Applications can be as simple as bringing an object to a worker. For example, a part that has to be fixed onto the inside of a car door. The robot can carry the object, place and maintain it at the right position so that the worker only has to fix it properly. This means the object is always placed at the right position and the worker can focus on the inspection of the part and make sure it is well fixed on the car door. This also reduces the risk of injuries to the human co-worker and allows the human worker to focus on the important tasks.

These types of applications are why we provide a kit that is specially designed for Universal Robots. Since we think that this platform is really promising for the robotic market we have put together an all-inclusive kit. The kit includes a Robotiq 2-Finger 85 Gripper and all the necessary accessories to install it on Universal Robots including the software components to make programming easy. It may at times be difficult to figure out which gripper will best suit which robot, but choosing a combination with well proven functionality makes the choice easier than trying something random. Take a look at what is included in the package in the following link.

By Romy A Letourneau - September 23, 2019
END_OF_DOCUMENT_TOKEN_TO_BE_REPLACED