Why use ROS-Industrial for Industrial Robot Applications?

Robotics gave a talk about Why industrial robot OEMs should care about ROS, on the 12th of May 2013 at ROScon in Stuttgart, Germany. I hope the whole robotic community was listening, because this talk emphasized the importance of ROS-Industrial and countered general OEM criticisms leveled at it for being an open source platform.

According to Mr Nieves, one of the most common criticisms is that as an open source software it is unreliable and provides an unacceptable risk for mature markets that have a low tolerance for errors. But this ignores the 10+ years of IT with open source performing in mission critical applications, as well as the fact that many universities use it allowing for smoother transfer of applications from robotic laboratories into the commercial marketplace. Closed systems may be sufficient for large productions with one application repeated indefinitely, and this may be true for pre-existing mature markets, but this is unlikely to be the direction that robots are heading to in the future.

The areas where robots are likely to be used in the future include such diverse industries as logistics, consumer goods, food, medical/clinical, rehab, recycling and probably many more that we have not even thought about applying robots too at the moment. New markets require new robot functionality and the OEM’s are not in a position to deliver this as their development resources are consumed with servicing their existing business.

This is why ROS-Industrial is important for future robot development, because of the applications it enables. All the interesting peripherals and algorithms will be developed on ROS first, long before they are developed for a specific OEM platform. OEM’s that have a robust interface to ROS and ROS-Industrial will have an advantage in getting to market first with these new capabilities. ROS offers a development community that is not encumbered by maintaining existing businesses. As manufacturers, it only makes sense to move to a hardened, stable version of ROS from which to work. ROS provides tools to improve the ease of use especially through standardization, as well as in the area of collision avoidance tools. ROS will help with all the extra stuff besides the kinematics that need to be done to achieve collaborative robots.

The ROS-Industrial open-source community shares technologies and works towards common goals. User-generated content creates value for the whole community and signals the immediate priorities of the user base to all ROS-I developers. One goal of ROS-Industrial is to provide interoperability between industrial robot platforms in order to leverage higher level ROS software. In order to achieve this, a ROS interface standard for industrial robot controllers is required. Anybody creating a ROS-Industrial driver must adhere to this standard. One example for standardization is the simple message protocol which interfaces multiple industrial robot controllers and offers a common interface on the Robot Operating System level.

One of the historic problems with technology is that closed proprietary systems slow down the development of systems which cannot interact easily. With a common non-proprietary structure many developers can solve innumerable problems simultaneously. This moves robot development along at a pace which is equal to the demand for robot applications.

What systems use ROS-Industrial packages? 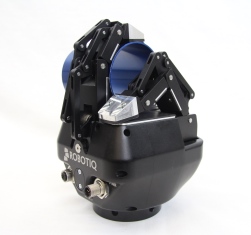 The ROS-Industrial distribution contains stacks or meta-packages for several industrial vendors. More information can be found on the related supported hardware page for:

ROS-Industrial is a BSD-licensed software development program designed to create a Unified Robot Description Format (URDF) for industrial robots, ie standards. ROS is released under the terms of the BSD license originally meaning Berkeley Software Distribution and is open source software. Most importantly this means it is FREE for commercial and research use. The ros-pkg contributes packages that are licensed under a variety of open source licenses, while the ROS wiki is licensed under Creative Commons Attribution 3.0. But the bottom line is you can integrate these code packets into your product without extra costs.

ROS-Industrial Open-Source Software Web pages provide installation instructions and tutorials for new users. So anyone can access this information and develop a working understanding of the code. The ROS Software wiki pages provide detailed information on the ROS software on which ROS-Industrial is based. Training is an on-going process and while a lot of it can be done on-line with tutorials readily available, seminars are also organized. Click here to find the next available classes.

The two-day program from Monday, May 19, 2014 – Tuesday, May 20, 2014 at SwRI in San Antonio, TX will comprise technical talks and tutorials that will introduce you to new tools and libraries, as well as teach you more about the ones you already know. Previous experience a prerequisite.

Then there is the European version, the:

As ROS developers are the next crop of robot talent, when OEM’s look to hire developers, these are the types of people they are looking for.

When you contribute everyone wins! To contribute code or learn about ongoing coding efforts in which you can take part, check out how to get involved here.

So, this is why ROS and ROS-Industrial is important! To move robots out from the university labs and into the market smoothly and efficiently. Where as, traditionally a lack of standards has hindered the implementation of new technologies, ROS can avoid this pitfall for industrial robots, let's take advantage of it!